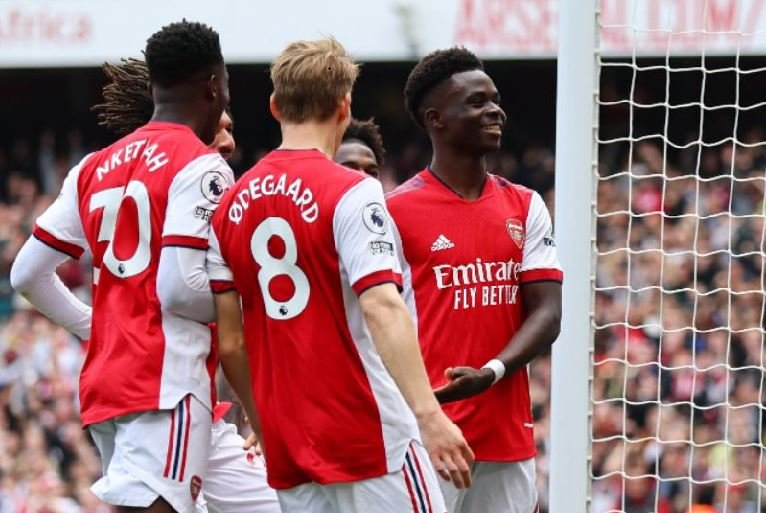 Arsenal stepped up their claims for a place in the Premier League’s top four at the expense of Manchester United’s ambitions in a thriller at Emirates Stadium.

The Gunners came into the game on an upswing after ending a run of three successive defeats with victory at Chelsea, while United were attempting to bounce back from a humiliating 4-0 loss at Liverpool.

And Arsenal took three crucial points as the visitors paid the price for shambolic defending and a missed penalty by Bruno Fernandes that undermined an enterprising attacking display.

Saka added the second from the penalty spot on 32 minutes after he was fouled by Telles.

United were a real danger in attack, the returning Cristiano Ronaldo deservedly pulling a goal back before the break.

It set the scene for a United siege, only for Fernandes to waste their big chance by carelessly rolling a second-half spot-kick against the post after Tavares handled.

Arsenal cashed in on the reprieve when Granit Xhaka sealed the win by lashing home the Gunners’ third from 25 yards with 20 minutes remaining.

Arsenal’s win completed a superb response to three league losses that had jeopardised their top-four hopes.

Mikel Arteta’s side had to fight through adversity – they were not convincing defensively and had several escapes – but they seized their chances when they came to take full advantage of United’s carelessness in front of goal.

Tavares gave them the perfect start and while goalkeeper Aaron Ramsdale had a mixed afternoon, he also made some crucial saves, one from Telles early on and another from Diogo Dalot proving significant.

But Xhaka’s thumping drive gave De Gea no chance and there was a real mood of celebration inside Emirates Stadium at the final whistle.

Arsenal have inflicted serious damage on any slim hopes United may have had of reaching the top four while maintaining the pressure on north London rivals Tottenham in the battle to qualify for next season’s Champions League.

While Manchester United’s performance bore no resemblance to the embarrassing capitulation at Liverpool, the end result was still the same and their hopes of taking a place in next season’s Champions League are fading fast.

They are now six points behind Arsenal, having played a game more and with only four league matches left.

Interim manager Ralf Rangnick has become increasingly outspoken about their failings, likening what needs to be done at Old Trafford under new manager Erik ten Hag to “open heart surgery”.

He rang the changes here, dropping Harry Maguire after a traumatic week in which the United captain not only suffered a nightmare display at Liverpool but also had to cope with police conducting a sweep of his home after a bomb threat.

It did not have the desired effect as United were let down by defensive frailty despite a performance that contained real menace going forward.

United were also left complaining bitterly when they were not awarded a first-half penalty after Cedric Soares appeared to handle. Dalot twice struck the woodwork and Ramsdale was called into action often, so the commitment could not be questioned here.

There was much that was good about United’s display but the decisive moment was that second-half penalty miss by Fernandes with Arsenal hanging on desperately at 2-1.

He went through an elaborate jig before carelessly rolling his spot-kick against the post. In that moment Arsenal were reprieved and United struggling, before Xhaka finished them off.