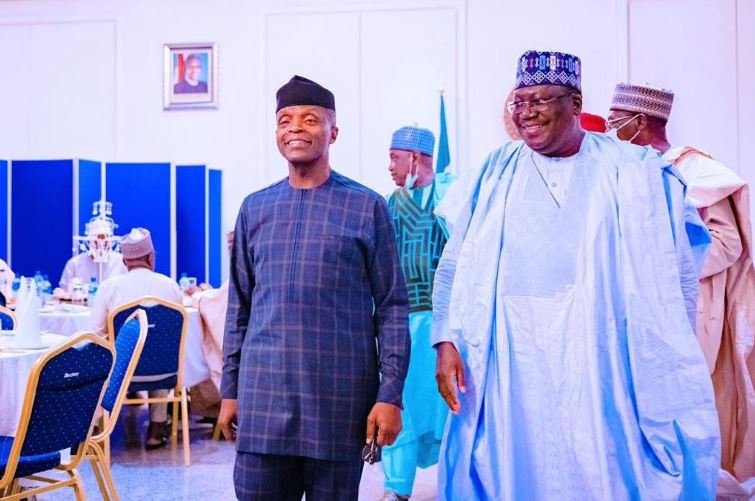 As 12 APC governors joined Vice President Yemi Osinbajo on 13 April for Iftar dinner, the atmosphere was one of camaraderie even as anxiety reached a crescendo.

Prof. Osinbajo was going to declare to run for presidency and although he enjoys a smooth relationship with the governors, he needed to tell them first hand what his plans were.

A source at the Iftar meeting disclosed that it was visible that the VP had a good relationship with the governors across party lines, ethnicities and religions.

The source explained that their relationship deepened because in the last seven years the Vice President and governor are members of the National Economic Council, NEC and have held many meetings on national issues.

According to another source, one that is close to one of the governors, “the VP felt the need to inform the governors ahead of a planned public declaration of his decision to contest presidency in 2023 under the APC platform.”

“Osinbajo’s next consultation plans is to meet with more governors and to continue consultations with other critical stakeholders in the National Assembly and other political gladiators.”

It was revealed that “being the chairman of NEC in the last seven years the VP has had an excellent relationship with governors across party lines, ethnicities and religions. Many of the governors are also members or directors of some federation owned agencies where the VP is chairman and their relationships in these agencies has also deepened the bonds, producing a robust relationship.”

Although there were no commitments sought or granted at the meeting but sources close to some of the governors said “the atmosphere was very relaxed, revealing how most of the governors are very well disposed to the VP, who has actually become a champion of States, in the last seven years.”

A quick check indeed showed that the Buhari administration has come to the aid of governors several times with some different financial bailouts and refund of Paris Debt.

Our investigations also revealed from the attendance that both Muslims and non-Muslim Governors with sufficient representation from all political zones in the country were seated. Majority of northern governors were present at the meeting.

Referring to the Iftar dinner, the source added that, “So in talking about what happened on that night when the APC governors had an Iftar dinner with the Vice President hours before he made that declaration this morning, the relationship the Governors shared with the VP was a solid foundation,” said a source who sat through the meeting.

“Some of the Governors actually told their aides that soon after they got the IV from the VP, other aspirants started planning to send out such invitations too, like they didn’t think of it before?

It also emerged that the Osinbajo’s Iftar dinner with the Senate APC Caucus led by Sen Ahmed Lawan last Tuesday evening reflected the cordiality that exists between the legislature and the executive under the current dispensation.

Osinbajo had at different times worked closely with some members of the National Assembly, and worthy of note as chair of the Tripartite Committee comprising representatives of the executive, legislature and APC.

A close source at the Aguda House residence of the VP who spoke on the condition of anonymity said that the VP in his remarks acknowledged the support of the lawmakers, praising them for their patriotism and contributions to national development.

The source noted that Prof. Osinbajo was particularly appreciative of the legislators’ support in his core area of supervision (the economy), and recalled their contribution to the overall performance of the budget especially with the passage of the finance bills, among others.

Another source close to a ranking senator present at the meeting, said Osinbajo who informed the senators of his aspiration to succeed President Buhari, commended the lawmakers’ contributions to the progress of the party, particularly recollecting their efforts in the tripartite committee that helped in stabilising the party.

The source revealed that Sen. Lawan in his response noted that Prof. Osinbajo was fit and eminently qualified to run for the Office of the President having served as VP with diligence, humility and total dedication.

Speaking later in a chat with journalists shortly before departure, Sen. Lawan said the meeting with the VP was in the spirit of Ramadan which provided an avenue to discuss political development in the country.

“Naturally, the Vice President will tell us that he has expressed his interest and that he wants to consult with our Senate APC caucus; he wanted us to hear from his mouth and that we did; and he was seeking our support in whatever way we can at the appropriate time.”

Sen Lawan added that the senators “wished the Vice President good luck in this endeavour”, and noted that “the Senate APC Caucus and indeed, the National Assembly caucus of the APC will continue to work very hard for our great party the APC to continue to provide services to Nigerians and also work hard to ensure that by 2023, the next administration is an APC administration at the centre and majority of the states in our country by the Grace of God, will be APC.”

The entirety of the APC Caucus in the Senate was present at the event.

The infamy of a hired ThisDay hand by Bright Okuta