Alaafin of Oyo was 'a philosopher king' – Osinbajo
Advertisement 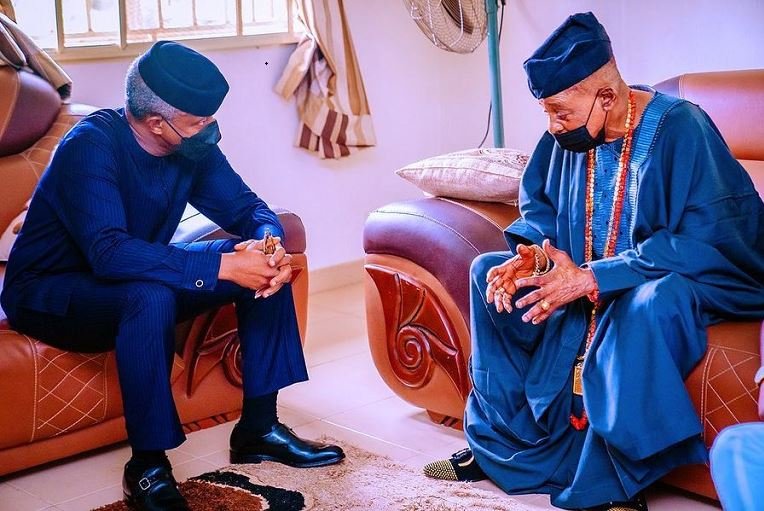 Osinbajo spoke during a condolence visit to the royal family, members of the Oyomesi and other chiefs on the death of the late Alaafin on Friday in Oyo, Oyo State.

The vice president said he shared same legacy with the late traditional ruler–the legacy of a great Nigeria.

He said that he came with the warm greetings of President Muhammadu Buhari and his special condolence on behalf of the government and people of Nigeria.

“Kabiyesi impacted everyone; he impacted the president himself; and the president recalls on two occasions when he personally interacted with him in recent times and he has the fondest memory of him.

“And he says that he believes that this is one of the most forthright men he has ever met; I bring you his condolences.

“I want to say that Kabiyesi was in the mold of a philosopher king; a man of great intellect and depth; he was not just a king; he was a philosopher as well.”

Osinbajo said that the Alaafin made useful contributions on the concept of rule of law and that of separation of powers.

He said that the late Alaafin posited that the concepts originated from the system of government in the Oyo kingdom.

“As a matter of fact, one the very important contributions that he made to the constitutional history of Nigeria is his assertion that the concept of rule of law and separation of powers which was made popular by the likes of Dicey and Montesquieu, was actually birthed the system of government in Oyo State.

“The relationship between the Alaafin and the Oyo Mesi; and that was the first example of the concept of Separation of Powers and the concept of Rule of Law.

“And his assertion was correct because Oyo Mesi preceded the likes of Dicey.

“The Oyo kingdom and the system of government in Oyo kingdom preceded a lot of those who then made the concepts popular.”

Osinbajo said he would miss his interactions with Kabiyesi; the disputes, the contentions and conversations that they had on political history, on political economy, on restructuring and various other ideas and concepts that Kabiyesi made.

He said that the late traditional ruler made well-researched and sound contributions on diverse issues.

“Many times, when Kabiyesi spoke, he did not speak from just as an opinion; his opinions were well-researched.

“And he will tell you that he has argued with himself before arguing with you because his opinions are always so well expressed that you will you chance but to come up with much better argument if you are even going to have any chance at all in the conversation.

“Kabiyesi was a most erudite person; one of the things you will come away with anytime you meet Kabiyesi is that this is one the foremost intellectuals that our society has produced.

He said that Nigeria would miss a great Nigerian, a great monarch–one who was forthright and spoke the truth always.

“We will all miss him and I pray that his memory will remain blessed,” he said.

The vice president, afterwards signed the condolence register, visited and condoled with the wives of the late Alaafin.