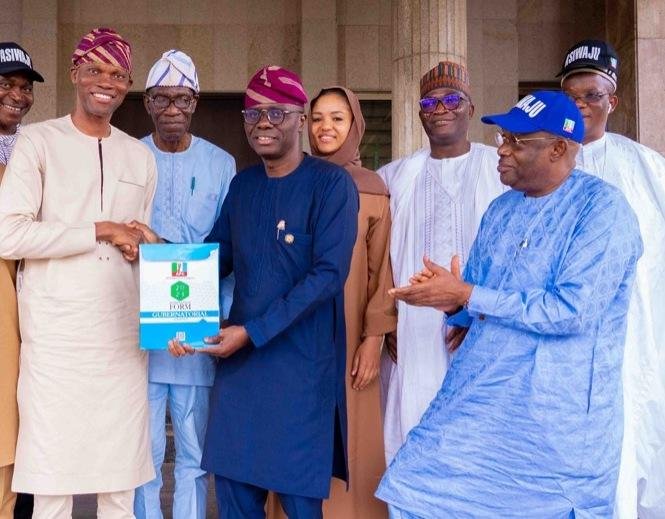 The forms were picked at the APC’s national secretariat in Abuja by a member of the House of Representatives, representing Ikeja Federal Constituency, Hon. James Faleke.

Faleke, who also picked presidential expression of interest and nominations forms for APC national leader, Asiwaju Bola Tinubu, was accompanied by former Secretary to the Government of the Federation (SGF), Mr Babachir Lawal and hundreds of members of the Tinubu Support Groups (TSG) to the party’s secretariat.

The governorship Expression of Interest and Nominations forms were presented to Governor Sanwo-Olu at the Lagos Governor’s Lodge, Asokoro, Abuja by the Chief of Staff to the Governor, Mr. Tayo Ayinde.

It would be recalled that Governor Sanwo-Olu was unanimously endorsed a few days ago for a second term shot by the Lagos APC apex leadership body, Governance Advisory Council (GAC).

The Governor has also received endorsement from prominent individuals and groups in the last few weeks, demanding that he should throw his hat into the ring for a second term based on his remarkable performance during his first term in office.

Alaafin of Oyo was ‘a philosopher king’ – Osinbajo