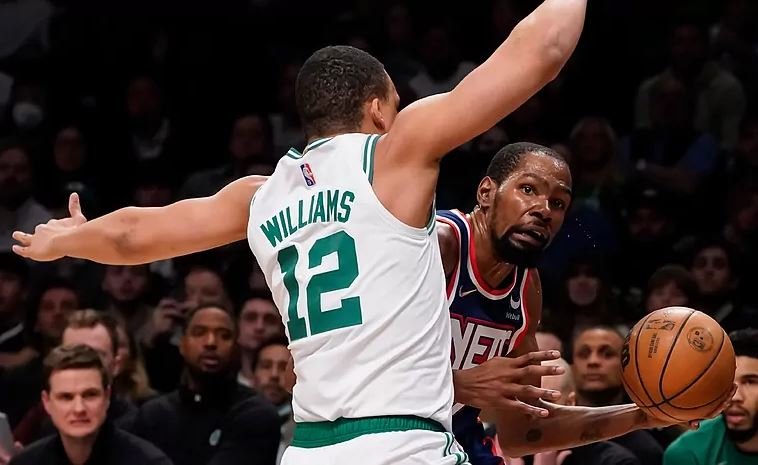 The Boston Celtics completed its four-game sweep of the Brooklyn Nets on Monday at Barclays Center to advance to the Eastern Conference Semis against the Milwaukee Bucks or the Chicago Bulls.

Kevin Durant finally got out of his scoring slump to finish Game 4 with 39 points, seven rebounds and nine assists in 47 minutes of action. Kyrie Irving, on the other hand, struggled shooting and went 6-for-13 from the field for 20 points in 45 minutes on the floor.

Irving added five rebounds and five assists, and scored a 3-pointer with less than two minutes in the final frame to bring Brooklyn within three on the scoreboard. He then missed a layup on the next possession, but got bailed out by Durant, who scored a floater to make it a one-point game.

Jayson Tatum had fouled out by that point, getting his sixth foul of the contest with 2:48 left to play. His absence gave the Nets a sliver of hope that Jaylen Brown put an end to with the first Boston basket since Tatum fouled out.

Durant then scored two free throws to make it a one-possession game. Al Horford responded with a putback on a missed shot from one of his teammates, giving the Celtics a four-point lead with 13 seconds on the clock.

Nets head coach Steve Nash called a timeout to draw up a play but when Goran Dragic inbounded the ball to Durant, he missed the 3-pointer. Patty Mills then fouled Marcus Smart to stop the clock at 7.1 seconds, and the Defensive Player of the Year scored both free throws — his first attempts from the stripe — to ice the game.

Following another timeout by Coach Nash, Durant made it a three-point game with a successful shot from beyond the arc. Smart then went back to the line with 2.1 seconds left to play and secured the victory for the Celtics.

It was a wire-to-wire win for Boston, who led by as many as 15 points, but Brooklyn managed to tie the score on three occassions. A huge part of why they lost was because Nic Claxton, who scored 13 points, went 1-for-11 from the free throw line.

Claxton played 23 minutes at the five despite Andre Drummond starting at the center position. Drummond only played the first four minutes of the game and never got off the bench after that.

Seth Curry scored five threes for 23 points and Dragic added 10 with a couple of huge buckets down the stretch. Brown scored 22 for the Celtics, Smart got 20 points with 11 assists, Grant Williams contributed with 14 points, and Horford added 13.

This is the first time in their careers that with Durant or Irving get swept. They had a combined 45 playoffs series without getting swept before facing the defensive-minded Celtics.