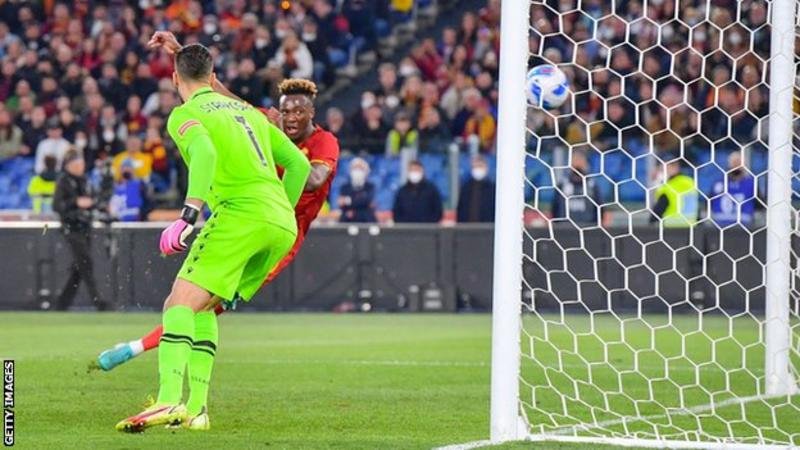 Arsenal are set to renew their interest in England striker Tammy Abraham, 24, this summer and will offer Roma £50m in an attempt to seal a deal. (Star Sunday)

Denmark midfielder Christian Eriksen, 30, is wanted by incoming Manchester United manager Erik ten Hag. Eriksen is currently on a six-month deal at Brentford that concludes at the end of the season. (Star Sunday)

West Ham have joined the bidding for Torino and Italy striker Andrea Belotti, 28. (Fichajes – in Spanish)

Real Madrid are leading the race to sign 29-year-old Germany defender Antonio Rudiger, who is out of contract at Chelsea at the end of the season. (Goal)

Rudiger turned down an offer of £200,000 a week to stay at Stamford Bridge. (Sunday Telegraph)

Talks between Kylian Mbappe’s representatives and Paris St-Germain over a new contract for the 23-year-old forward are moving in a positive direction. (ESPN)

Barcelona manager Xavi says he wants to keep Dutch midfielder Frenkie de Jong, 24, who has been linked with a move to Manchester United that would reunite him with former boss Erik ten Hag. (Manchester Evening News)

West Ham will attempt to sign centre-back Michael Keane, 29, from Everton if the Toffees are relegated from the Premier League this season. (Star Sunday)

Crystal Palace are considering a move for 18-year-old English striker Malcolm Ebiowei, who will be a free agent at the end of the season after leaving Derby. (Sun on Sunday)

Juventus have made contact with the representatives of 34-year-old Paris St-Germain winger Angel di Maria. (Gianluca di Marzio – in Spanish)

Napoli want at least 80m euros (£67m) if they are to consider selling 23-year-old striker Victor Osimhen, who is among Arsenal’s targets for the summer. (CBS Sports)

Atletico Madrid midfielder Rodrigo de Paul, 27, wants a move back to Italy and is being tracked by Inter Milan. (La Gazzetta dello Sport – in Italian)

Celtic are in talks to sign Tottenham centre-back Cameron Carter-Vickers, 24, on a permanent deal. (SBI Soccer)