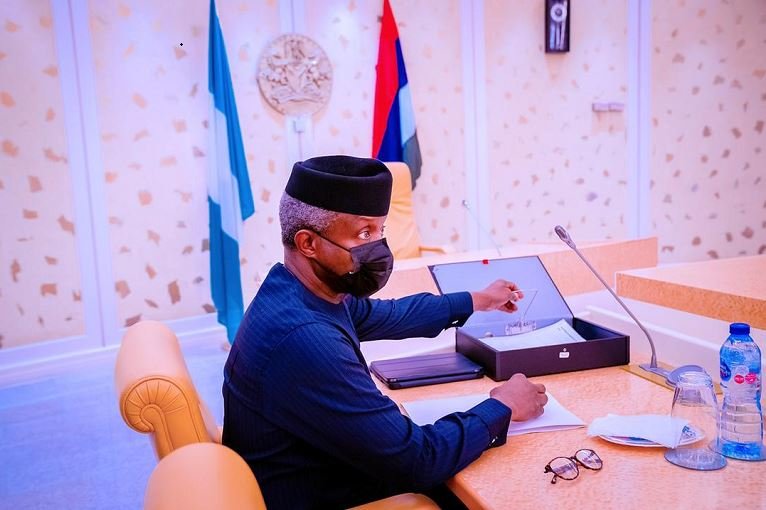 Vice President Yemi Osinbajo has met with some university dons following his declaration to contest the 2023 presidential election on the platform of APC.

Osinbajo who received a team of 13 professors who came to endorse and support his presidential aspiration discussed how to put an end to the ongoing university strike by Academic Staff Union of Universities (ASUU).

Chronicle NG reports that negotiations between the university body and federal government had hit a snag, with ASUU vowing to continue its industrial action until its demands are met.

A source close to the meeting said Prof. Osinbajo was bothered about the ASUU and seeks a swift resolution to the matter.

The source said the Vice President who is also a former lecturer has experience on both sides of the divide and that he is already working to find a solution.

In a press statement issued by Laolu Akande, the spokesperson to the Vice President after the meeting, Prof. Osinbajo noted that professionals cannot sit out politics if they really want things to change in Nigeria.

Osinbajo said “one of the most important things I recall when I served first as Attorney General of Lagos State was that it is so important for those of us who are in academics to participate because not only are we among the more knowledgeable groups, we have also done more work.”

Addressing Prof. Osinbajo, the leader of the group, Prof. Shehu Adamu, the Dean of the Faculty of Health Sciences at the National Open University of Nigeria, NOUN, said the visit was to intimate the VP on activities and efforts of the group to support his aspiration to become Nigeria’s President.

He said the academics were convinced of the VP’s capability to lead a more prosperous Nigeria, hence their resolve not only to endorse him, but also offer their expertise and do what it takes to ensure that the VP emerges victorious in 2023.

Another member of the delegation, Prof. Nasiru Musa Yauri, the Vice Chancellor of the Al-Kalam University in Katsina said of the group: “We have decided we will not fold our arms; we will do whatever it takes to actualise the PYO 2023 project.”

In a similar vein, Prof. Chukwuemeka Jaja Nwanegbo, the Head of Political Science Department at the Nnamdi Azikiwe University in Awka, Anambra State, declared that the members of the academic community “don’t want to sit back and watch the political terrain disallow you from emerging. So, we want to work with you, other professionals and students to actualise your bid.”

Olubadan To Osinbajo: In God’s name, you will be President of Nigeria