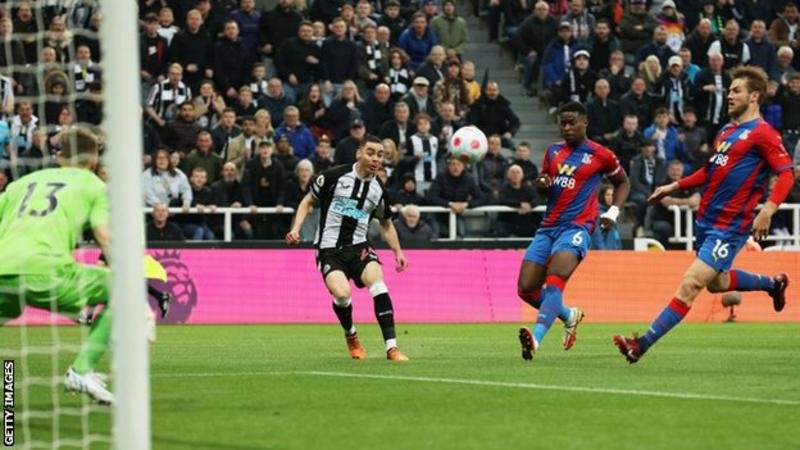 Miguel Almiron scored his first club goal since February 2021 as Newcastle beat Crystal Palace to record a sixth consecutive win at St James’ Park and move on to 40 points in the Premier League.

Almiron finished magnificently from Bruno Guimaraes’ lofted pass to lift Eddie Howe’s side up to 11th in the table and all but guarantee the Magpies’ place in the top flight next season.

Guimaraes and Allan Saint-Maximin tested Vicente Guaita in a one-sided first half, while the impressive Joelinton sent a header looping over the crossbar not long after the interval.

Zaha also sent a curling effort inches over the crossbar in the final minute of second-half stoppage time.

Patrick Vieira’s side drop to 14th after suffering back-to-back league defeats for the first time since the turn of the year.

Considering the position Newcastle were in when Howe took over in November – 19th in the table and five points from safety – reaching 40 points with five games to spare has to go down as a magnificent achievement.

Many will point to the Magpies’ January outlay of more than £90m as the chief reason behind their march up the table, but that is an oversimplification.

Howe has had to make do without England full-back Kieran Trippier – who the Newcastle boss described as “inspirational” following an impressive start to life on Tyneside – and 2020-21 top scorer Callum Wilson through injury, while the talismanic Saint-Maximin has been frustratingly inconsistent since returning to fitness in March.

Others have stepped up to the plate, of course – chief among them former Lyon midfielder Guimaraes, who was heavily involved in the game’s only goal.

The Brazilian’s looping ball over the Palace defence was collected in his stride by Almiron, who darted into the penalty area from the right before directing a sublime finish into the top corner – his first Newcastle goal since scoring twice in a 3-2 win over Southampton more than 14 months ago.

It was a richly deserved opener for the home side, who dominated midfield in the first half in particular and restricted Palace to just one tame Edouard effort before the interval.

Palace improved after half-time and pinned the home side back in the closing stages, but other than Zaha’s two efforts off target they rarely looked like leaving St James’ Park with a share of the spoils.

Vieira, whose side were beaten by Chelsea in the FA Cup semi-final on Sunday, cut a frustrated figure at full-time, but his opposite number Howe could not hide his delight after guiding the Magpies to their ninth win in 13 league games.