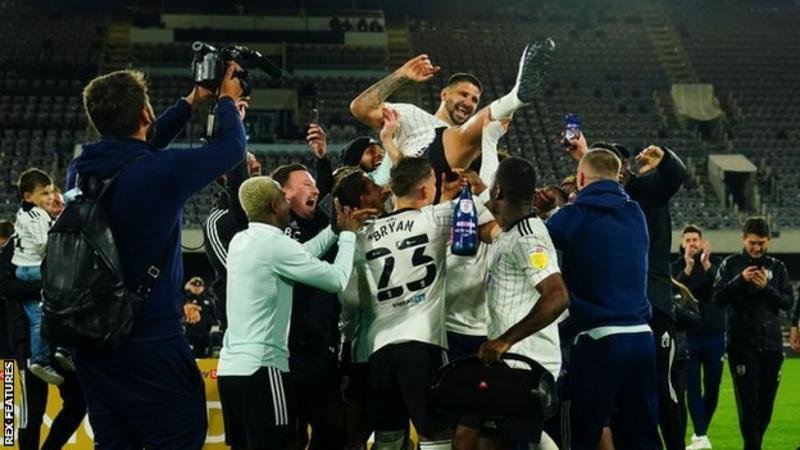 The Serbian striker netted twice in the first half, sandwiching an eye-catching strike by teenager Fabio Carvalho.

Mitrovic was denied a hat-trick by Preston goalkeeper Daniel Iversen – but it made no difference to the outcome as victory confirmed promotion for Marco Silva’s side.

Fulham could effectively secure the title as early as Saturday if they win at second-placed Bournemouth.

The Cottagers might have fallen behind early on, with Marek Rodak called into action to thwart Ched Evans and then tip Ben Whiteman’s long-range drive over the bar.

But any hint of nerves swiftly evaporated in the ninth minute as Joe Bryan won possession and burst down the left flank to set up Mitrovic, who slid the ball through Iversen’s legs.

Carvalho and Harrison Reed went close to extending the lead as the home side seized control, repeatedly slicing through Preston’s defence.

It was Carvalho who did eventually grab Fulham’s second in the 34th minute, rifling home on his left foot after Neeskens Kebano’s cross had deflected perfectly into his path.

Mitrovic made it 3-0 just before half-time, reaching the 40-goal mark after another incisive break along the left, with Harry Wilson providing the assist.

North End nearly reduced the deficit early in the second half as Rodak produced another fingertip save to foil Cameron Archer, palming his attempt on to the woodwork.

But there was to be no dramatic Preston comeback – nor a third goal for Mitrovic, who had two more attempts kept out by Iversen and was eventually substituted with a quarter of an hour remaining.

Although Neco Williams’ effort from distance whistled just over, Fulham had to be content with the three goals – and the win that wrapped up their third promotion in five years.

The clinical Cottagers have shot through the Championship like a bolt of lightning and look set to smash a number of records as they win promotion back to the top tier with four games to spare.

They could still break Manchester City’s Championship second-tier record, since the launch of the Premier League in 1992, of 108 goals.

Aleksandar Mitrovic opened the scoring in the ninth minute

Silva’s men also wrote themselves into the history books in January when they scored 19 goals in three games and were the first English side in 88 years to score six or more goals in three consecutive games.

Serbian striker Mitrovic’s 40 goals – already another Championship record – have helped propel Fulham out of sight at the top of the table and all eyes will be on him at the start of next season to see if he can finally recreate his scintillating Championship form against the country’s top defences in the Premier League.

The west London club have been something of a yo-yo club in the past few seasons, with consecutive promotions and relegations to and from the Premier League every season since their 2017-18 play-off final victory against Aston Villa.