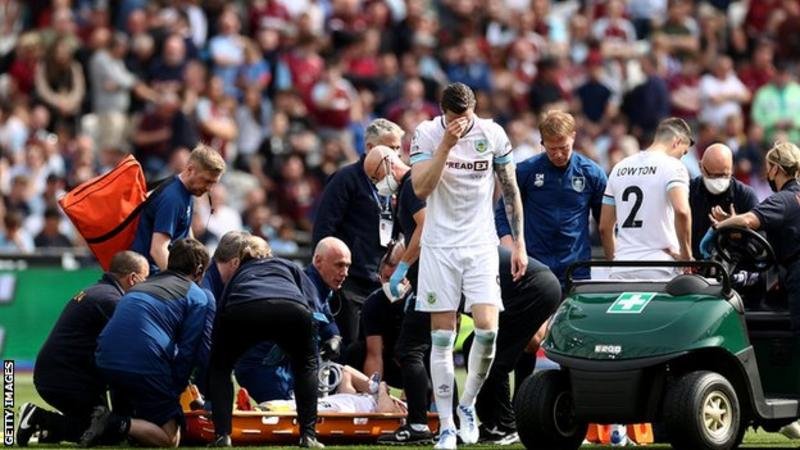 West Ham came from behind to dent managerless Burnley’s hopes of avoiding relegation from the Premier League in a match tainted by Ashley Westwood’s injury.

Tomas Soucek equalised from close range to cancel out Wout Weghorst’s opener as West Ham extended their unbeaten home run to eight games in all competitions.

The Hammers could have snatched victory late on but they found an inspired Nick Pope, who produced three big saves in the final stages, standing in their way.

Both sides started with attacking intent but the game took a turn for the worse when Westwood was stretchered off with a worrying leg injury after what looked like a innocuous challenge with Nikola Vlasic.

Play was stopped for eight minutes with medical staff from both clubs attending to the Burnley midfielder.

No-one was more visibly upset than Vlasic, who dropped to his knees with concern, but the incident appeared to galvanise the lowly visitors. Three minutes after Westwood’s departure, Burnley scored the opener.

Maxwel Cornet’s header was met by Jay Rodriguez, who could only divert the ball against the crossbar, before Weghorst rose highest to head in the rebound.

Cornet had the chance to double the visitors’ lead after being brought down inside the area by Lukasz Fabianksi, but his poorly hit penalty went wide.

The Clarets sacked boss Sean Dyche on Friday but remained resolute under the interim guidance of Under-23s coach Mike Jackson and injured club captain Ben Mee until Soucek salvaged a draw for the hosts.

The result means Burnley move to within three points of safety, although they have played a game more than 17th-placed Everton, while West Ham remain seventh, five points outside the Champions League places.

Defiant Burnley running out of time

Burnley made headlines on Friday after they dismissed Dyche, who was the Premier League’s longest-serving current manager, having taken over at Turf Moor in October 2012.

Two days later, the Clarets headed to an in-form West Ham side who had just booked their place in the Europa League semi-final.

The Hammers started brightly and Jarrod Bowen’s whipped effort was well kept out by an acrobatic save from the influential Pope.

The seriousness of Westwood’s injury was noted almost instantly as the midfielder, who fell to the ground after a fair coming together for possession, waved on the medical staff frantically.

It seemed to hand Burnley the impetus, as they went down the other end and opened the scoring, while Weghorst’s celebrations were muted in testament to his team-mate’s misfortune.

When Cornet was released from inside his own half before running clear and rounding Fabianski, they had the chance to double their lead with their first penalty of the season, but it was missed.

Those are the chances that will need to be converted if Burnley are to achieve the unlikely and retain the top-flight status.

In the end, the Clarets were punished, courtesy of Soucek’s shoulder as he connected with Manuel Lanzini’s free-kick.

As the Hammers pushed on for the winner, Pope stood firm and showed the form that resulted in an England call-up last month. Two excellent saves to deny Michail Antonio came either side of a Gordon Banks-esque dive to keep out Issa Diop’s header.

Should Burnley fail to survive, you can be certain Pope will be of interest to other clubs in the Premier League.