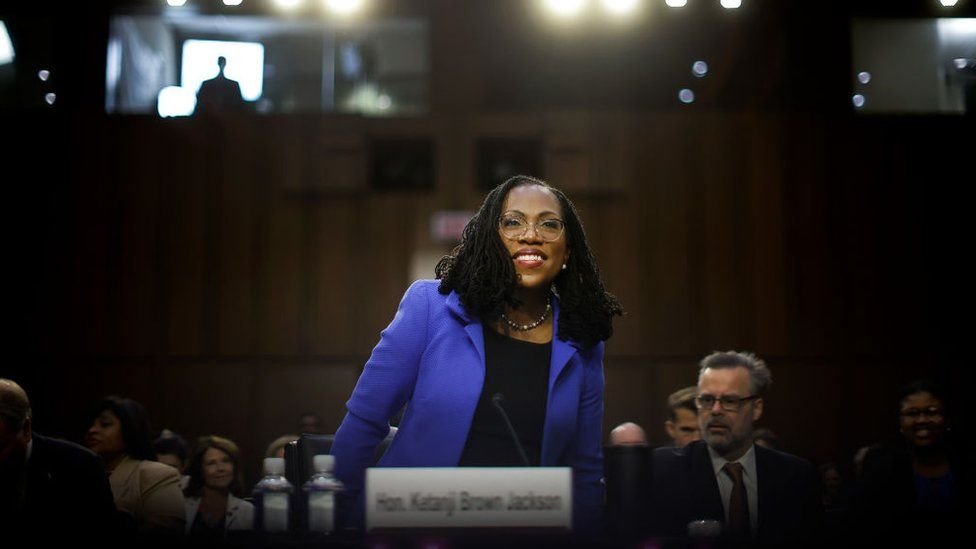 The US Supreme Court is to include a black female justice for the first time in its 233-year history after the Senate confirmed Justice Ketanji Brown Jackson to the nine-member bench.

Three Republicans crossed the aisle to seal her appointment by a vote of 53 to 47.

Chuck Schumer, the majority leader, called it a “joyous day” for the US.

The vote was overseen by Vice-President Kamala Harris, the first black woman to hold the office.

Ketanji Brown Jackson, 51, will replace Justice Stephen Breyer, a fellow liberal judge for whom she once clerked, upon his retirement in June.

The lifetime appointment will likely see Ms Jackson on the bench for decades, but will not shift the ideological balance of the current court, with its 6-3 conservative majority.

Ms Jackson has said she has a “methodology” to deciding cases but not an overarching philosophy. And she agreed with Republican senators about the importance of abiding by the text of the Constitution, as it was intended by the founders.

The jurist, a Washington DC native, currently sits on the influential US court of Appeals for the DC circuit. She has two degrees from Harvard University and once served as editor of the Harvard Law Review. She worked as a public defender in Washington before joining a private practice prior to her judicial appointments.

Some Republicans took issue with clients Ketanji Brown Jackson took on as a public defence lawyer – namely terrorism suspects held at Guantanamo Bay, with some accusing her of being soft on crime.

Others, however, applauded the diversity of experience her legal career would bring to the bench over the course of what was at times highly fractious and almost entirely polarised six week confirmation process.

Senator Lisa Murkowski of Alaska, one of three Republicans to vote in favour of Justice Jackson said this decision rested, in part, as a “rejection of the corrosive politicisation” that has come to shape the confirmation process.

The new justice “will bring to the Supreme Court a range of experience from the courtroom that few can match given her background in litigation,” Ms Murkowski said.

The top court plays a crucial role in American public life and is often the last word on highly contentious laws and disputes between states and the federal government.

2023: Why we must support Tinubu – Arewa Chieftain