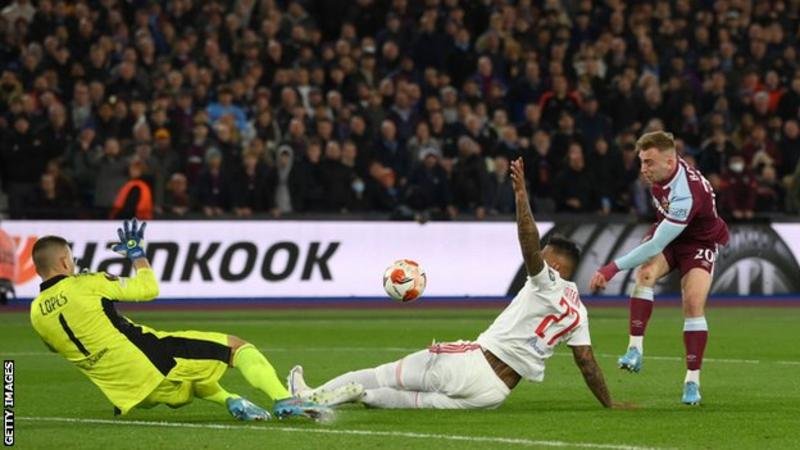 West Ham’s Europa League quarter-final tie against Lyon remains finely poised after the 10-man Hammers battled to a 1-1 draw in the first leg at the London Stadium.

West Ham spent the entire second half a man down after defender Aaron Cresswell was sent off in first-half stoppage time. Cresswell was shown red after he brought down Lyon captain Moussa Dembele when through on goal, with the game goalless.

But the Irons took a shock 52nd-minute lead when Jerome Boateng’s mistake fell to Jarrod Bowen whose shot deflected off of the diving German defender to loop over Lyon goalkeeper Anthony Lopes.

West Ham’s lead, however, lasted just 14 minutes as they were haunted by on-loan Tottenham midfielder Tanguy Ndombele after he tapped home from close range.

The second leg in France will take place next Thursday (April 14) with the winner of the tie meeting either Barcelona or Eintracht Frankfurt in the last four.

Aaron Cresswell was sent off in first half stoppage time

Bowen’s goal triggered euphoric scenes in the stands and a fierce reaction from Moyes, who was feeling pretty aggrieved at how the game had been panning out.

Dembele’s unnecessary wink as Cresswell made his way off was reminiscent of Cristiano Ronaldo’s infamous reaction to Wayne Rooney’s dismissal during the 2006 World Cup.

As on that occasion, there was controversy over the decision.

However, Cresswell certainly grabbed former Fulham and Celtic striker Dembele’s arm after the Lyon player had run past Kurt Zouma and once referee Felix Zwayer determined the full-back was the last man, the outcome was inevitable.

Moyes waited for Zwayer at the interval to offer his opinion, to which the German reacted by handing out a yellow card.

The West Ham boss had already been unimpressed with the official given he had twice stopped play for an injury to a Lyon player which was not head related.

But the Scot’s real frustration was reserved for a fan who ran onto the pitch and forced the game to be stopped just as West Ham were pushing forward on a rare attack close to the Lyon box.