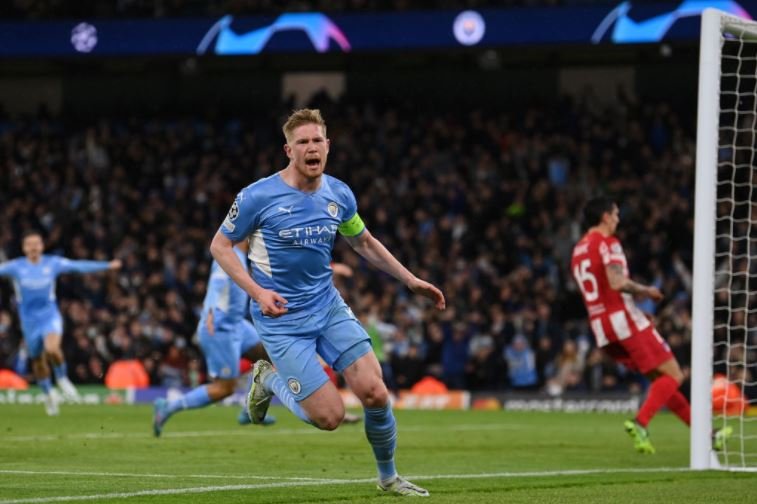 Diego Simeone’s side performed with their trademark defensive discipline, restricting City to very few opportunities until De Bruyne pounced to make the breakthrough with 20 minutes left.

Phil Foden, on as a substitute, produced the moment of magic to unlock Atletico with a perfect pass through the legs of Reinildo for De Bruyne to slot past goalkeeper Jan Oblak.

It was the decisive moment in the tightest of games but City manager Pep Guardiola’s wild celebration illustrated just how much it means to take a lead, even if slender, to Madrid for the second leg on 13 April.

It was clear from the opening moments this was going to be a night for patience from City as Atletico, to no-one’s great surprise, strung a bank of five defenders across the pitch and invited Guardiola’s side to break them down.

For the first 45 minutes it worked to perfection as the hosts barely laid a glove on the Spanish champions, who protected keeper Oblak with the diligence and desire Simeone demands.

It was actually Atletico who threatened with a couple of breaks early in the second half, but City eventually managed to impose themselves and become more of a threat.

De Bruyne saw a free-kick well saved by Oblak and Aymeric Laporte headed over from a good position following a corner.

But it was the introduction of Foden that finally allowed City to spread some stardust on proceedings.

He showed glorious control and vision to nutmeg Reinildo, allowing De Bruyne to fire low past Oblak to ignite what had been a tense, largely subdued atmosphere inside Etihad Stadium.

City could not add a second despite their pressure, but any lead is precious against an Atletico side who have made a speciality of frustrating Premier League giants in the past.

Liverpool found that out in 2020 when they lost both legs as holders in the last 16, while Manchester United were also eliminated at the same stage this season.

Simeone marched off in defiant fashion at the final whistle and the Argentine will rightly feel Atletico are still in this tie – it would be folly to dismiss Simeone or his durable Champions League campaigners.

The onus, however, is now on them to attack in the return leg. This may well suit City more than having to break down the red and white wall of resistance that made their lives so difficult until that important De Bruyne strike on his 50th Champions League appearance for the club.