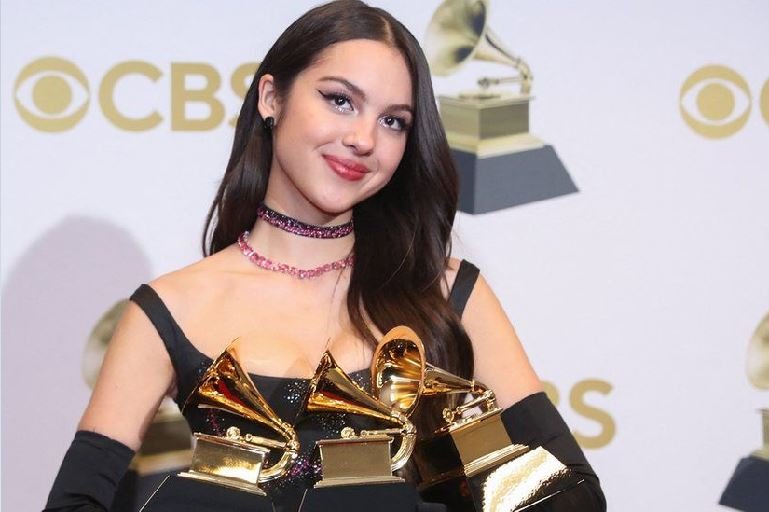 Silk Sonic’s soul throwback anthem Leave The Door Open took home both the record and song of the year prizes.

Apart from the awards, the ceremony saw a tribute to Foo Fighters star Taylor Hawkins, and a video plea from Ukraine’s president Volodymyr Zelensky.

In a pre-taped message, he urged musicians to “fill the silence” left by Russian bombs “with your music”.

“Tell our story. Tell the truth about the war on your social networks and TV. But not silence.”

His speech was followed by a performance by John Legend, accompanied by Ukrainian musicians Siuzanna Iglidan and Mika Newton; and poet Lyuba Yakimchuk.

This year’s Grammys presented one of the most open fields in years, with the “big four” categories expanded to include 10 nominees each.

Batiste’s album, We Are, is rooted in black music tradition, from the New Orleans jazz he grew up with, to the classic soul of Al Green, via modern R&B.

The title track was written in support of the Black Lives Matter movement in 2020 – and the album’s themes of positivity and intergenerational wisdom made it a favourite with voters, who awarded Batiste 11 nominations heading into this year’s Grammys.

Jon Batiste also picked up awards for his work on the soundtrack to the Pixar film, Soul

Silk Sonic, a joint project between Bruno Mars and rapper/drummer Anderson .Paak, plough a similar furrow. Their sumptuous ballad Leave The Door Open is steeped in the 70s soul sounds of acts like The Chi-Lites and Earth, Wind & Fire.

The duo were clearly delighted with their double victory in song of the year and record of the year.

“We are really trying our hardest to remain humble at this point,” said Paak, “but in the industry, we call that ‘a clean sweep’.

“To all the other nominees… the drinks is on Silk Sonic tonight.”

The songcraft of both acts is impeccable, but they leave the Grammys with a headache.

Neither Batiste nor Silk Sonic could be considered the defining sound of 2022 (Batiste’s album failed to chart in the UK at all).

Worse than that, their victories meant that younger, more relevant acts like Lil Nas X and Billie Eilish were overlooked. Neither act collected a trophy despite multiple nominations.

Silk Sonic gave a Vegas-themed performance to open the show

Thank goodness, then, for Olivia Rodrigo – who was recognised for a stellar debut year that saw her score a global hit with the break-up ballad Drivers License, then top it with the whiplash-inducing pop-punk of Good 4 U.

The 19-year-old dedicated the latter to her parents, saying the award was “for you guys and because of you guys”.

“When I was nine-years-old, I told my mom I was going to be an Olympic gymnast, even though I could barely do a cartwheel,” she recalled. “The next week, when I told her I was gonna win a Grammy, she was very supportive, even though I’m sure she thought it was just a little kid pipe dream.

There were also three awards for Foo Fighters, a little more than a week after drummer Taylor Hawkins was found dead in his Colombia hotel room at the age of 50.

Presenter Jimmy Jam accepted the prizes in the band’s absence, “with prayers to their loved ones”.

‘A concert with awards’

The ceremony was held at the MGM Grand in Las Vegas, after a three month delay due to the Covid-19 surge in the US.

He kept his word. For the first 25 minutes, the show shunned prizes to concentrate on music, with three back-to-back performances from the night’s main nominees.

Silk Sonic opened the show with a funky strut through their Vegas-themed track 777; followed by Olivia Rodrigo, who gave a sensitive reading of her ballad Drivers License from inside the vintage white Mercedes she drove in the song’s video.

If the Grammys wanted to display the breadth of this year’s nominees in three songs, they succeeded. And then they kept going.

BTS tore the roof off the MGM Grand with a heist-themed performance of their pop smash Butter; while Billie Eilish’s scorching rendition of Happier Than Ever could only be extinguished by an on-stage rainstorm.

Chris Stapleton, who dominated the country music categories, gave a gruff but mesmerising performance of best country song winner Cold; and Lady Gaga threw herself into the jazz standards Love For Sale and Do I Love You, as she paid tribute to her duet partner Tony Bennett, who was unable to attend the ceremony for health reasons.

At the end of the performance, Gaga was moved to tears. “I love you, Tony,” she said into the mic. “We miss you.”

By focusing on music over sketches and set pieces, the Grammys became pacier and less self-indulgent than years gone by. It was the right lesson to learn from last year’s scaled-back ceremony, where Covid restrictions forced artists into more intimate stagings.

The ceremony also continued last year’s innovation of celebrating behind-the-scenes talent, whose livelihoods were interrupted by the pandemic. After highlighting independent music venues in 2021, this year’s ceremony turned the spotlight on women working behind the scenes.

Among them was Billie Eilish’s tour manager Nicole Massey, who called the star as “the best 20-year-old boss in the world”.

The ceremony took place a week after the Oscars – and the altercation between Will Smith and Chris Rock wasn’t far from people’s minds.

During a non-televised portion of the ceremony, one presenter, Nate Bargatze, introduced the classical nominees while sporting a helmet.

“This is what comedians at awards shows have to wear now,” he joked.

Noah also referenced the incident during his opening speech.

In contrast to Rock’s barbs, however, the South African’s monologue was positively good-natured, full of gentle quips about Lil Nas X’s height (he’s taller than you’d expect) and the show’s Las Vegas setting.

“Look at this, people are doing shots,” he gestured to the audience at home. “I mean, last year, people were doing shots, but it was more Moderna and Pfizer. This time, we’re back in the mix.”

In what must have been a relief for the organisers, habitual award show disruptor Kanye West decided not to attend, after having his invitation to perform withdrawn for “concerning online behaviour”.

However, the star (who now goes by the name Ye) picked up two awards in the rap categories: best rap song for Jail and best melodic rap performance for Hurricane.

Bennett, meanwhile, became the second-oldest Grammy winner in history. The star, who is 95, won best traditional pop vocal album for the 14th time for Love for Sale, his collaborative album of Cole Porter songs with Lady Gaga.