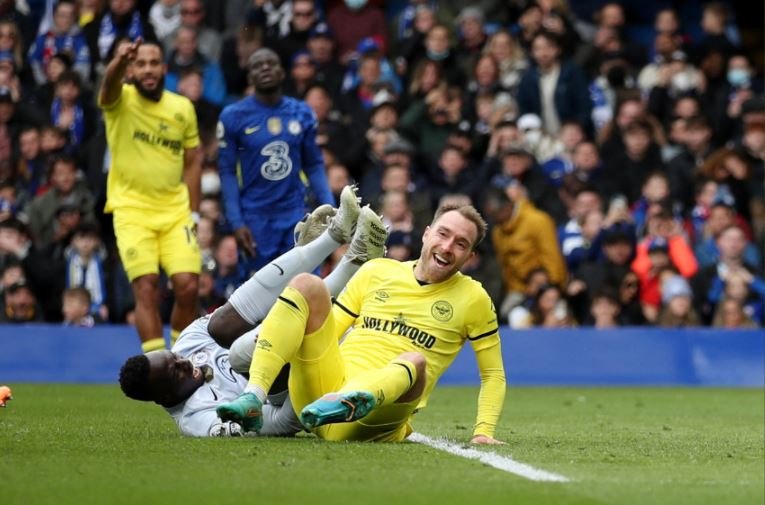 Christian Eriksen scored his first Brentford goal as the Bees came from behind to beat Chelsea 4-1 for the first time since 1939.

The Denmark midfielder swept home Bryan Mbeumo’s low cross to put Brentford in front after Vitaly Janelt had cancelled out Antonio Rudiger’s long-range opener at the start of the second half at Stamford Bridge.

Janelt scored Brentford’s third with a cool finish from a tight angle after running on to Ivan Toney’s searching pass.

Substitute Yoane Wissa completed a thumping victory when he fired into the corner after Chelsea failed to clear a free-kick into the box.

The victory moves Thomas Frank’s side up to 14th in the Premier League, 11 points clear of the relegation zone.

Chelsea stay third but are now 13 points behind second-placed Liverpool after a second home league defeat of the season.

Eriksen provided the story of this truly remarkable Brentford win with that first goal for the club since making his comeback with the Bees after suffering a cardiac arrest playing for Denmark against Finland at Euro 2020 in June.

It was a wonderful moment but was simply the flourish on a quite brilliant team performance from Brentford, who thoroughly deserved one of the greatest victories in the club’s history. The margin of the scoreline did not flatter them.

Thomas Frank’s side took the fight to Chelsea from the first whistle, with striker Ivan Toney having three presentable chances as they went right on the front foot.

If there was any disappointment, it was the fact they did not cash in on that superiority, and they paid for it when Rudiger fired Chelsea in front.

Brentford’s response was truly outstanding, giving them the result that surely means they will stay in the Premier League next season.

And there is no doubt Eriksen’s presence has lifted those around him. Brentford have won all three games he has started since making his comeback as a substitute against Newcastle United in late February.

Eriksen may be the star name but this was the complete all-round display, with Toney giving Chelsea’s vulnerable defence a torrid time and Janelt providing the cutting edge.

Brentford were also resolute in defence, with Frank and his players fully deserving the huge ovation they received from their ecstatic fans after the final whistle.

Chelsea get what they deserve

Chelsea can have no complaints about this defeat or the embarrassing scoreline as they were abject in a performance that was completely out of character with their recent efforts.

Tuchel’s side won their six matches in March but were never fully switched on from first to last and paid the price.

If there is any consolation for Tuchel – and he will have to search very hard to find any – it is that this did not come in Wednesday’s Champions League quarter-final first leg against Real Madrid at Stamford Bridge.

If they repeat this horrible defensive performance, and indeed their entire shambolic effort, their hopes of retaining the trophy they won last June might be over.

Despite the usually reliable presence of Rudiger and Thiago Silva, Chelsea were never unable to control Brentford, who ran them ragged and actually should have scored more than four goals.

Chelsea must hope this is a blip, rather like their 5-2 home loss to the eventually relegated West Brom last season, because they cannot afford this when Real Madrid come here this week.

The likes of Karim Benzema would have been licking their lips watching this defensive fiasco.