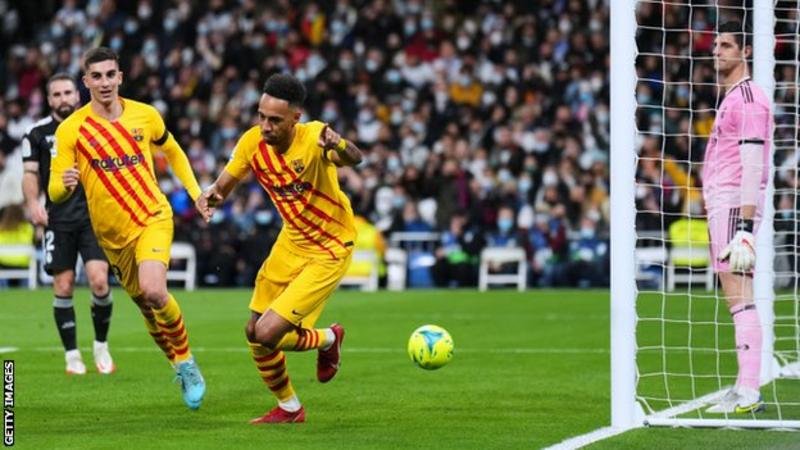 Barcelona boss Xavi will not rule out a remarkable late push for the La Liga title after his side’s thrashing of runaway leaders Real Madrid in a statement win at the Bernabeu.

Real, who had won the previous five Clasicos, are nine points clear of Sevilla with nine matches to go, with third-placed Barcelona a further three behind with a game in hand.

Pierre-Emerick Aubameyang scored twice on his Clasico debut and set up Ferran Torres.

Aubameyang and Ronald Araujo headed in crosses from Ousmane Dembele before the break and Aubayemang then flicked the ball into the path of Torres for their third.

Ex-Arsenal striker Aubayemang chipped in a fourth from a Torres pass.

Barca are now unbeaten in 12 games and Xavi said: “I don’t know if we can win the title, we can’t rule out anything. Maybe we’re a bit late, but this is a very big win for us.

“We were much better than Real Madrid. We played almost as a home team in the the ground. It’s a day to enjoy, not only as a Barca manager but also a fan.

“We could easily have scored five or six. We changed our negative dynamic of losing the last few Clasicos.”

Barca midfielder Sergio Busquets added: “If we still have a small chance to make a run for the title, we will fight until the end. It’s very difficult but in football anything can happen. We are Barca.”

Real boss Carlo Ancelotti took responsibility for the heavy loss, saying “it’s my fault” – but urging his team to “forget it and move on”.

Barcelona have looked a completely different proposition since Xavi replaced Ronald Koeman in November, losing only once in La Liga in that time – and that defeat was more than three months ago.

Their winter signings from the Premier League have transformed them too, Aubameyang from Arsenal, Torres from Manchester City and Adama Traore from Wolves.

Only Memphis Depay (10 goals) has scored more than Aubameyang (nine) and Torres (five) for Barcelona this season.

It is surely too late for a title challenge, but this landmark result shows Barca are back – and could be in contention for the big trophies next season.

They blew Real Madrid away for their first Clasico win in three years and biggest league win at the Bernabeu since 2015. The impressive Dembele, booed by his own fans just weeks ago after failing to leave in January, set up the opening two goals.

Araujo had been chosen to start at right-back instead of Dani Alves to deal with the threat of Vinicius Jr, but ended up on the scoresheet himself.

Aubameyang set up Torres with a delightful backheel pass and chipped in their fourth himself, a goal initially ruled out for offside but given by the video assistant referee.

They wasted many chances to score more, with Aubameyang and Torres having six shots each.

“We’ll see where we can go from here after this big victory,” Aubameyang said.

“I was very excited to come to Barcelona and do well. It’s very easy when you play with such good players.”

Real boss Ancelotti will just hope this is a blip.

They were missing the injured Karim Benzema, who has been the outstanding player in La Liga this season with 22 goals and 11 assists.

Real might not have expected to have missed him quite this much though. They started without a recognised striker but Mariano Diaz’s half-time introduction did not make things any better.

In fact, Ancelotti’s substitutions at the break were a disaster as he changed his side’s shape too.

“We started the second half trying to play one against one at the back – three defenders against their three forwards – but it didn’t work. I can only apologise to the fans,” the Italian said.

It would have been even worse for Real if not for keeper Thibaut Courtois, who made six saves.

Most of the home side’s chances came after the scoreline was 4-0 and Barca had missed several attempts for a fifth goal. David Alaba forced a good save from Marc-Andre ter Stegen in one of the better opportunities.

It is not time to panic though. This was only their third league defeat all season and they are still in control of the title race.

“It’s a very tough blow to lose this way,” Ancelotti added. “We know we have a good lead at the top of the table. We can’t make dramas about this game – we have to move forward.”