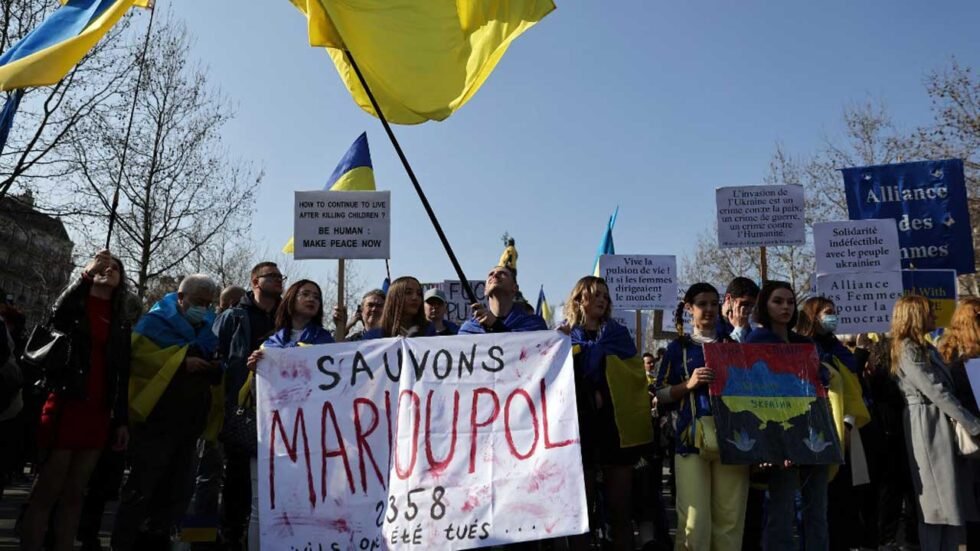 More violence expected as Russia’s deadline for Ukraine to surrender the port city before 5am Moscow time has passed.

The move came as US President Joe Biden announced a trip to Poland for crisis talks over the Russian invasion.

“We can’t talk about surrendering weapons,” Vereshchuk told the Ukrainska Pravda online newspaper, “we have already informed the Russian side about it.”

The Kremlin’s military command had warned authorities in Mariupol had until “5am tomorrow, that is on March 21” to respond to eight pages of demands, which Ukrainian officials said would amount to a capitulation.

“We call on units of the Armed Forces of Ukraine, territorial defence battalions, foreign mercenaries to stop hostilities, lay down their arms” said Russian Colonel-General Mikhail Mizintsev, warning those who did not surrender would face court martial, and worse.

Kyiv’s rejection came as Russian bombs hit targets across the country overnight, killing at least six in Kyiv and allegedly damaging a chemical plant in the north of the country causing an “ammonia leakage”.

In Washington, the White House said Biden — who is due to visit Europe this week to meet leaders from NATO, the G7 and the European Union — would also travel to Poland.

There he is expected to hold talks with President Andrzej Duda to discuss a joint response to the humanitarian crisis that has seen around two million Ukrainians flee to Poland alone.

The humanitarian crisis is perhaps most acute in Mariupol, where for almost a month Russian forces have bombarded and besieged the southern port city trapping an estimated 350,000 people.

The UN has described the humanitarian situation in the city as “extremely dire” with “residents facing a critical and potentially fatal shortage of food, water and medicines”.

Mariupol is a pivotal target in Vladimir Putin’s war in Ukraine — providing a land bridge between Russian forces in Crimea to the southwest and Russian-controlled territory to the north and east.

A Greek diplomat who remained in the city during some of the bombardment said it would rank alongside history’s most ruinous wartime assaults.

“Mariupol will be included in a list of cities in the world that were completely destroyed by the war, such as Guernica, Stalingrad, Grozny, Aleppo,” Manolis Androulakis said after flying back to Athens.