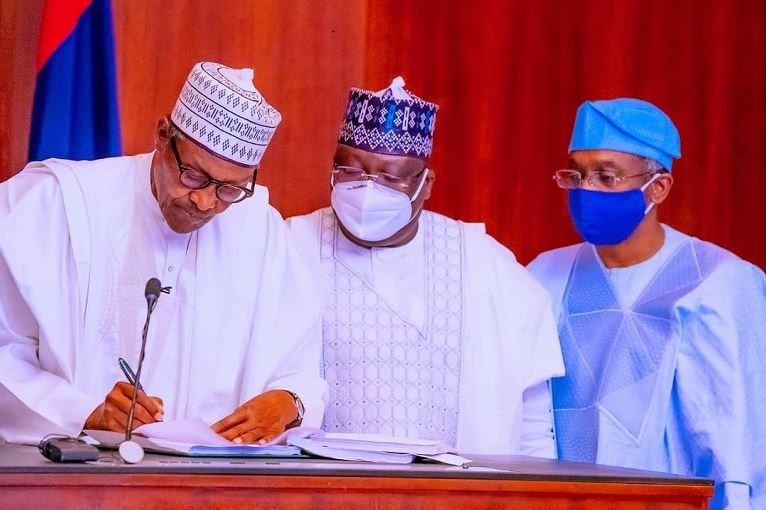 President Muhammadu Buhari’s request that that Section 84 (12) of the Electoral Act 2022 be amended has failed to pass second reading during plenary on Wednesday.

The President, in a letter, drew the attention of chamber to the provisions of Section 84(12) of the Electoral Act, which, according to him, constitutes a “defect” that is in conflict with extant constitutional provisions.

According to him, Section 84(12) of the Electoral Act constitutes a disenfranchisement of serving political office holders from voting or being voted for at conventions or congresses of any political party, for the purpose of nomination of candidates for any election in cases where it holds earlier than 30 days to the election.

But lawmakers kicked against an amendment barely 24 hours after a court ruled against amending the Electoral Act.

During proceeding, Senate President Ahmad Lawan urged his colleagues to listen to the President’s request and have a second look at Section 84 (12).

The Bill for an Act to amend the Electoral Act 2022 and for related matters, 2022 (SB. 952) was presented by Senate Leader, Senator Yahaya Abdullahi.

But it was quickly countered by Senator Adamu Aliero who cited Order 52(5) to stop the Senate from treating the Bill pending the time that the court set aside the order on the Bill.

Reacting to Senator Aliero, Senate President Lawan said, “A judge ruled that the Executive, the Attorney General of the Federation (AGF) and the National Assembly should not tamper with the newly signed Electoral Law until due process is followed.”

“I said the President was within his competence to request for amendment including every Nigerian to ask for an amendment in any law.”

“So for us to be specific to this particular request, the request was duly done and it is for us in the Senate to look at the request.”

“I think we are not breaching any law. In fact, we are trying to promote democracy by doing this because one day someone would go to Court and say the Senate and National Assembly should not sit.”

“My ruling remains we are going ahead to consider the request which the Leader of the Senate is leading the debate and at the end of the debate we are going to vote and the votes decide the fate of the bill.”

“Whatever we do here is to protect democracy and sanctity of this chamber. I have nothing personal, what you want is what I go with.

“One of the hallmark of democracy is justice, fairness and equity. In any election, where people have the advantage of holding Executive power either by proxy or appointment and for such people to have access to compete with others from the street is an unjust society.

But Senator Smart Adeyemi begged to defer. “Therefore I disagree to reconsider a decision that has already been settled,” he said referring to the signed Electoral Act.

Omo-Agege added that, “Mr. President, that 1999 Constitution was put together by the best brains, 50 of them were nominated to put together this constitution.”

“The framers of this Constitution knew that a day like this would come and notwithstanding, they clearly stipulated in the Constitution, those provisions dealing with qualification and disqualification.”

“I therefore rise to support that the motion as moved by the Senate Leader be allowed to go for Second Reading,” Omo-Agege said.

Subsequently, the bill was put to a vote and it failed to pass Second Reading.