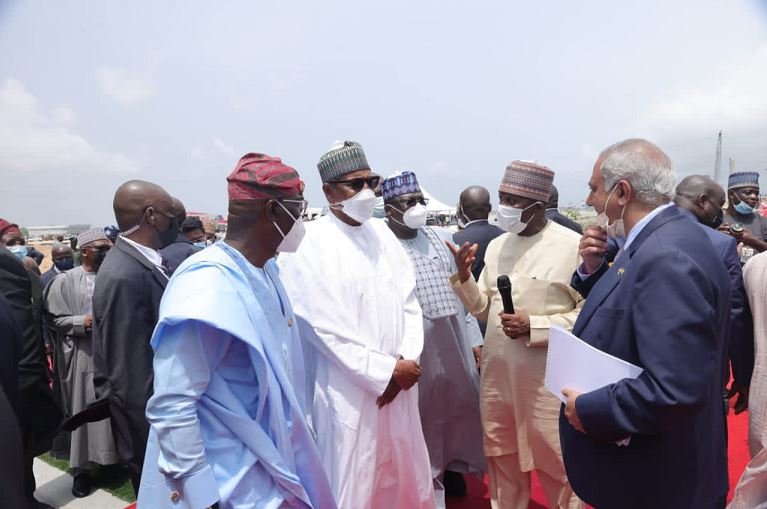 President Muhammadu Buhari on Tuesday declared that Nigeria’s dependence on imported products in the agriculture sector will soon be a thing of the past with the inauguration of Dangote Fertilizer Plant, which has an installed capacity of 3.0 million metric tonnes of Urea per annum.

Speaking at the commissioning of the plant in Ibeju Lekki, Lagos State, President Buhari said the plant will further advance Nigeria’s drive towards achieving self-sufficiency in food production, create jobs, increase the inflow of foreign exchange and accelerate economic growth.

He commended the Chairman, Board and Management of Dangote Industries Limited for their business initiative in conceptualizing and building this plant, which is the second largest in the world.

The President expressed confidence that the investment in this plant will replicate the Group’s earlier exploits in the cement sector, where Dangote Cement holds the enviable record as our continent’s largest cement producer, with footprints in ten other African countries.

Buhari noted that, “This new plant is a renewed testament to the widely acknowledged patriotism of Alhaji Aliko Dangote and the leadership of Dangote Industries Limited. It also demonstrates their commitment to the socio-economic development of our country and the well-being of our people.

“Along with the several other subsidiaries, Dangote Industries Limited has created thousands of jobs across Nigeria. It is the second biggest employer of labour in this country, after the Federal Government.

“This is very pleasing because job creation by private sector operators is vital to security as it takes thousands of youths off the street,” Buhari said.

On other benefits of the plant, President Buhari expressed delight that with the commencement of exports to other countries including the United States, India, and Brazil, Nigeria is already gaining extensively in earnings of foreign exchange from the excess production of, and export from, the plant.

He noted that coming on stream of the plant had created huge opportunities in the areas of job creation, trade, warehousing, transport, and logistics, which would, in turn, create significant wealth, reduce poverty, and help in securing the future of the nation.

“In the agricultural sector, another focal point of our economic policy, we expect a boom as fertilizer is now readily available in greater quantities and better quality.

“Many Nigerians who hitherto practiced subsistence farming because of nonavailability of necessary inputs can now take up agriculture as a business.

“We expect the rise of a new breed of agropreneurs who will add value to farming and make the nation self-sufficient in food production,” he said.

President Buhari used the occasion to reassure Nigerians that his government is focused on providing an enabling environment for the private sector to thrive, pledging continuity in improving infrastructure, power and security as well as enacting relevant laws and regulations to drive investments in the economy.

“We are partnering with the private sector, through a tax credit scheme, in the rehabilitation of roads across Nigeria under Presidential Order No. 7.

“As we know, good roads contribute to easy movement of goods and services across the nation, thus reducing the cost of doing business and improving productivity.

“We are also rehabilitating our railway lines and building new ones to lessen the burden on our roads and create more effective multi-modal transportation networks,” he said.

“I look forward to coming back to inaugurate the Refinery and petrochemical plant later in the year.

“Projects of this magnitude and complexity require the support and collaboration of many persons and organisations. I am grateful to all of them.

“In particular, I would like to commend the Central Bank of Nigeria, the Development Finance Institutions and the Local and Foreign Commercial Banks that have supported the investor to make these projects a reality,’’ the President declared.

Lauding Dangote for helping to rebrand Nigeria through his mega investments across Africa, President Buhari said:

“He has fueled job-led growth and transformation of several African economies. I am proud of his contribution to affirming Nigeria’s leadership status in the continent, and I wish him many more successes in the future.’’

In his remarks, Dangote said the fertiliser complex, which occupies 500 hectares and built at a cost of $2.5 billion will drastically reduce the level of unemployment and youth restiveness in the country, through generation of direct and indirect employment.

”Agriculture accounts for over 20 per cent of Nigeria’s GDP, and the country is a leading producer of various agricultural commodities. The sector has the potential of becoming the biggest source of income for our Nation, providing employment and raw materials for industries.

”However, low fertilizer usage has been a major reason for low productivity in the sector. It is common knowledge that non availability of the product, in quantity and quality,  rather than affordability, is the primary constraint to the use of fertilizer.

”Our goal is to make fertiliser available in sufficient quantities and quality for our teeming farmers assuring greater agricultural output,” he said.

The Chief Executive of Dangote Industries expressed immense gratitude to President Buhari, for his sustained support and encouragement, and for honoring the invitation to come, in person, and inaugurate the plant.

He also commended the leaders of the host communities and their people for providing a peaceful and conducive environment for the project to thrive, recognizing the many years of enthusiastic teamwork, labour, toil and sweat of the Management and Staff of Dangote Group for their commitment to high performance,  perseverance and resilience.

The governor of Lagos State, Babajide Sanwo-Olu, recounted the role played by a former governor of the State, Asiwaju Bola Tinubu, in the establishment of the fertiliser plant and the refinery.

“The idea of having a free zone in the Ibeju Lekki was conceived by our leader Asiwaju Bola Tinubu.

“I was with him in 2003, when we took a trip to China and we were trying to conceive a free zone and this is where we are.

He thanked the President for coming to Lagos, adding that he looked forward to receiving him in a few months’ time to commission more projects.