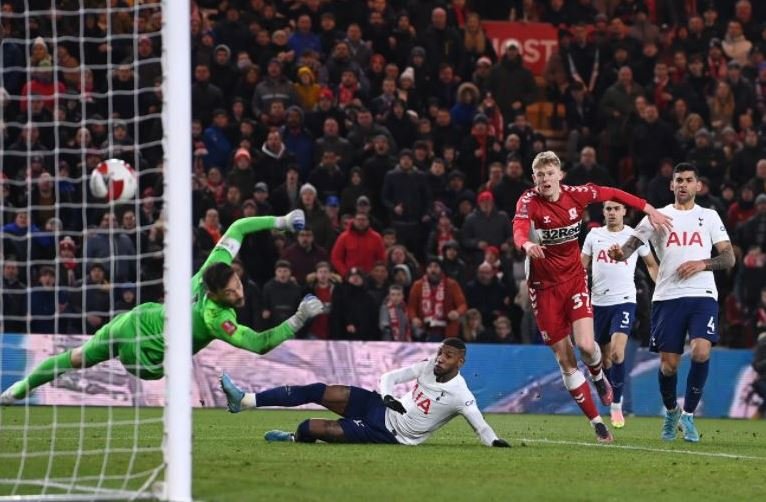 Substitute Josh Coburn scored a fine winner in extra time as Middlesbrough stunned Tottenham to reach the quarter-finals of the FA Cup.

Buoyed by a sell-out crowd at the Riverside for the first time in five years, Chris Wilder’s side, who beat Manchester United in the last round, matched their Premier League opponents throughout and broke the deadlock in the 107th minute.

Coburn latched on to Matt Crooks’ pass before the 19-year-old thumped an effort beyond Hugo Lloris and into the far corner from a tight angle.

Tottenham hope Antonio Conte is the manager to end their 14-year wait for a trophy but the north London club will have to wait at least another season.

As for Championship outfit Middlesbrough, they have now won eight games in a row at the Riverside but it is this victory the jubilant home crowd will remember.

Middlesbrough beat Manchester United on penalties at Old Trafford to reach this stage and Wilder said there was no chance of him resting players for the occasion, with opposite number Conte also naming the same Spurs side that beat Leeds 4-0 on Saturday.

The Italian is hoping to guide Spurs to a first trophy since they won the League Cup in 2008 but his side lacked the ruthlessness displayed at Elland Road against a well-drilled team who seemed to grow in confidence the longer they kept their top-flight visitors at bay.

Matt Doherty beat goalkeeper Joe Lumley to the ball out wide on the Spurs right, but could not loop an effort into the empty net from the best chance of the first half.

Middlesbrough midfielder Crooks scored in the fourth-round win over Manchester United and had a glorious chance to put the hosts in front after the break but headed over from Jonny Howson’s in-swinging corner.

England captain Harry Kane then saw an effort ruled out for offside at the other end.

The chances in normal time were few and far between, with Isaiah Jones looking Middlesbrough’s biggest threat and testing Lloris late on following a swift break.

Howson missed a header of his own after losing his marker from a corner and Son Heung-min could have won it for Spurs in stoppage time but nodded straight at Lumley as the game went to extra time.

From then on it was Middlesbrough who looked to have more energy and Marcus Tavernier forced Lloris into a low save, before Lumley was equal to a neat Son flick.

Then, in the second half of extra time, Wilder’s side did find a breakthrough.

Teenager Coburn popped up with a fierce winner to send the Riverside delirious and put the hosts into the quarter-finals for the first time since 2017.

“Speechless,” said Coburn. “In front of the Riverside Stadium, you cannot get better than that against a Premier League team. Just amazing. I can’t put it into words.”

Tottenham, meanwhile, have now lost seven of their 13 matches in 2022, although boss Conte cut a far calmer figure after this defeat than he did following the Premier League loss at Burnley six days ago.