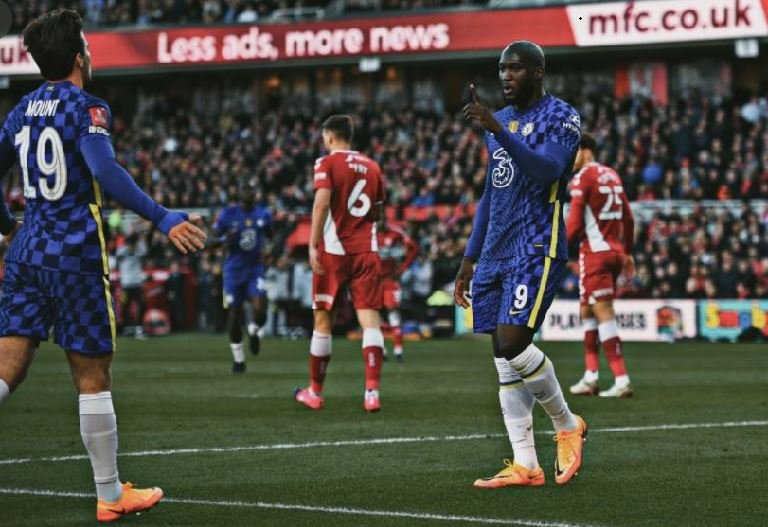 Romelu Lukaku scored his 12th goal of the season as Chelsea beat Championship side Middlesbrough to reach the FA Cup semi-finals.

Middlesbrough had knocked out Manchester United and Tottenham on their way to the quarter-finals but their hopes of claiming another Premier League victim were dealt an early blow when Lukaku tapped in from Mason Mount’s cross after a quick Chelsea counter.

Hakim Ziyech made it 2-0 midway through the first half with a superb dipping effort from the edge of the box before Lukaku was denied a second when Anfernee Dijksteel cleared off the line.

Middlesbrough showed plenty of endeavour in the second half as they looked to mount an unlikely comeback, with Arsenal loanee Folarin Balogun shooting wide after a promising counter, while Duncan Watmore also sent an effort over the bar from a good position.

However, Chelsea could have grabbed a late third when substitute Timo Werner met a free-kick but Middlesbrough goalkeeper Joe Lumley did well to palm away.

Chelsea will find out who they will play in the semi-finals, which will be played at Wembley on 16 and 17 April, when the draw is made before Sunday’s quarter-final between Nottingham Forest and Liverpool (18:00 GMT).

There had been a bit of needle before this game with Chelsea having had to make an awkward U-turn over their request for the game to be played behind closed doors for “sporting integrity”.

The club were unable to sell their entire 4,500 ticket allocation for the fixture because of sanctions that have been imposed by the government on Russian owner Roman Abramovich because of his connection to Russian President Vladimir Putin.

It meant they were backed by around 700 supporters who had got their tickets before the sanctions were brought in, while Middlesbrough were cheered on by a sell-out crowd at the 34,000 capacity Riverside Stadium.

Chelsea players have responded well amid the uncertainty surrounding the club off the pitch. They had been unsure if they would have a 10-hour round trip by coach to get to Middlesbrough just hours after returning from a Champions League tie in Lille because of financial constraints.

Since Abramovich had his assets frozen on 10 March as part of sanctions following Russia’s invasion of Ukraine, Chelsea have won all three games they have played and this was an ultimately routine victory against a side who have performed well against Premier League opponents in this year’s FA Cup.

Lukaku has endured a difficult campaign in which he has not looked completely happy at Chelsea but he was handed a start in this game.

And he made a key contribution, opening the scoring for a third FA Cup goal in four games, making an important clearance from a Marcus Tavernier free-kick with the score 1-0, and was denied a second only by a goalline clearance.

The Belgian’s celebration of his goal was muted, doing little to quash speculation about his long-term future, but he did what he was asked to do as Chelsea kept alive their hopes of a ninth FA Cup title.

It has been an excellent run in the FA Cup by Middlesbrough, who have been rejuvenated since Chris Wilder took charge on 7 November.

They started this game well and were not afraid to press high against a side who had won seven of their last eight games.

Ultimately, that bold start proved costly as they were caught on the counter for the opener but their run in the competition and their performances against Premier League opposition will give them confidence as they now switch focus to joining their recent FA Cup opposition in the top flight next season.

Middlesbrough are eighth in the Championship, two points off sixth but with two games in hand over most of those above them.