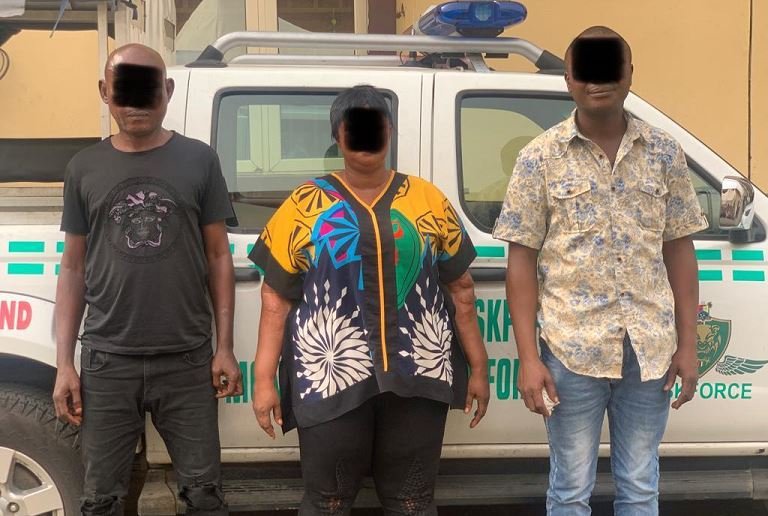 The Lagos State Taskforce has arrested three members of a fraud syndicate who operate in Ikeja, Egbeda and Igando parts of Lagos.

The three members of the gang, two males and one female, Bola Tony, 38, Eddie Okoro, 48, and Tochi Ikeji, 40, were arrested by the Taskforce on Friday at Ikeja under bridge when the trio were identified by one of their victims who saw them driving in traffic, and drew the attention of Taskforce officers stationed around the Bridge to them.

The victim who declined having her name on print was accosted by the gang the previous day and was dispossessed of the sum of 20,000 Naira under the guise of purchasing prayer materials to be used in neutralizing a purported charm laced to a fake sum of money in the boot of the gang’s vehicle.

Speaking on the arrest of the notorious suspects, the Taskforce chairman, CSP Shola Jejeloye in his office in Oshodi disclosed that this set of suspects are known for lurking in the shadows, searching for innocent victims to prey on. He disclosed that though the technic adopted by the gang is an old one, people still fall victim.

“The three of them set out in their vehicle searching for victims as passengers. The driver starts up a conversation about a large sum of money belonging to the female accomplice in the car who poses as a passenger and then she claims she stole the money from her diabolic husband who is out to destroy her,” the Taskforce chairman said.

“They now engage the innocent passenger in the scheme of getting to share the purported amount and the third passenger suggests a pastor who has the ability to neutralize whatever spiritual curse has been placed on the large sum of money. When they get to the location of the pastor, the extortion begins. The victim is compelled to part with various sums of money and this scheme could last for weeks.”

In his confession to the Police, Ejike the leader of the gang disclosed that he had been into the dubious act for over 3 years right after he lost his Danfo bus. He confessed to swindling the latest victim of 25,000 Naira and also claimed that the highest amount of money he ever made was 250,000 which was unevenly split four ways between all gang members.

The female suspect, Bola Tony confessed to joining the gang three weeks ago stating that she got only 2,500 Naira out of the 25,000 bounty.

“I was introduced to this gang by the leader of another gang, Tony who wanted me to join his gang but unfortunately his squad was complete. I didn’t make a dime throughout the three weeks of working except for the 25,000 naira made yesterday which has landed us in trouble today.”

CSP Jejeloye urged Lagosians to be watchful and observant especially when in unregistered and unmarked commercials vehicles as it is one of the major tools criminals use in perpetrating these crimes.

“Once conversations concerning illicit dealing over money commences in such a vehicle, please alert immediately and draw the attention of any law enforcement agent around,” he said.

He warned all criminal elements in the metropolis to turn over a new leaf or risk being arrested and prosecuted. “Fraudsters are not welcome here” he noted.

Buhari explains his fears ahead of APC convention