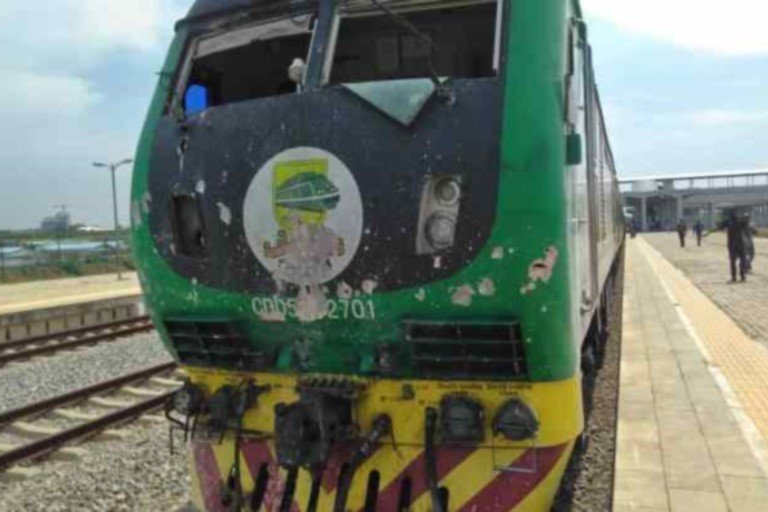 The terrorists who attacked a Kaduna-bound train and abducted unspecified number of passengers on Monday, have contacted their families.

They are yet to demand ransom, the families said yesterday.

A member of one of the families told our correspondent that the abductors informed them that their family members and many other passengers were safe.

The family member, who pleaded not to be named for security reasons, said the bandits made a telephone call on Tuesday night.

”They told us our sister and other missing passengers were with them in their camps and that she was safe. They didn’t say more than that before ending the call.

”We are scared. We are just praying for God’s intervention and her safety. We are pleading with the kidnappers to release her for us,” he said.

A journalist, whose mother and sister were kidnapped, said the bandits also contacted his brother.

He said his mother and sister arrived in Nigeria from Saudi Arabia and boarded the train to Kaduna.

”My mum and sister were on the train and are among those not accounted for.

”The bandits have contacted my brother but didn’t ask for ransom yet. They have told us that my mum and sister are with them in the forest.

”Please, join in prayer for their safe return. We are praying fervently that nothing bad will happen to them and others in their custody,” the journalist said.

Staff members of the Bank of Agriculture (BOA), whose Managing Director Alwan Hassan is still missing, were in a sober mood at the headquarters in Kaduna.

Some of the survivors yesterday accounted their encounter with the terrorists in interview with our correspondent.

The Federal Government said it was working on measures to ensure there are no further attacks on trains, including recruiting villagers to secure the tracks and deploying aircraft and drones.

The Inspector-General of Police (IGP), Usman Baba, in a statement by the Acting Force Public Relations Officer, Olumuyiwa Adejobi, a chief superintendent of police (CSP), said the equipment was part of a policy to integrate the use of innovative technology in law enforcement duties.

A police source said most of the drones will be deployed to monitor the Kaduna/Abuja rail track.

Minister of Transportation, Rotimi Amaechi, said there were plans to work with the Department of State Services (DSS) to employ villagers to man the rail tracks.

He thinks Monday’s attack succeeded because the Airforce could not deploy aircraft to accompany the train due to poor weather.

Amaechi said the Airforce had promised to resume escorting the train when operations resume, pending the installation of the integrated security surveillance and monitoring solution.

He spoke in Kaduna during a visit to the victims.

Amaechi said the damage caused by the attack would require significant expenses to repair. He put the cost at N8billion.

He said: “The level of damage supersedes the request we made for the purchase of equipment that will help install security, especially as it pertains to surveillance.

“A coach is about $4million, so if we are going to fix about four or five of them, then $4million should be about N2billion.

“So, imagine we are replacing about four, it will be N2billion multiplied by four and we are also going to replace about two locomotives which I don’t know the cost yet.

”We are going to replace about two kilometres of tracks, so it is quite huge.”

But governors expect more from the Federal Government in tackling worsening insecurity.

The Nigeria Governors’ Forum (NGF) believes the incessant violent attacks constitute a challenge to the capacity of the nation’s leadership.

In a statement by its Chairman, Ekiti State Governor Kayode Fayemi, the NGF said: “First, as leaders, we owe the victims and their relations an apology as these unwarranted acts of violence are becoming too regular and they basically question our collective capacity to govern.

“The NGF will want to call on the authorities to immediately install all necessary safeguards to forestall future acts of banditry on our rail tracks, roads, ports and borders.

“We need not remind those concerned that these constitute a major backbone to our national assets. We need to improve on security intelligence and the ability to act on intelligence gathered.

“In general, we need to give comfort to all our citizens, residents and investors that the security of lives and property can’t be taken for granted and that there is a government that is clearly in charge of what needs to be done.”

The Arewa Consultative Forum (ACF) lamented that the North had come under the siege of insecurity.

It also urged the Federal Government to deploy technology in protecting rail travellers.

“The ACF calls on government to put a 24-hour surveillance on the route to at least avert the ugly situations occurring,” the group said in a statement by its Secretary-General, Mallam Murtala Aliyu.

It urged the government to retool its failing security architecture.

“The Forum commiserate with the souls lost, sympathises with the wounded and prays for an end to such ugly menace, not only in Kaduna State but all over the federation.

“As a guardian and custodian of the welfare and integrity of the North, the ACF is tired of crying out on the issue of security, and other challenges, in the northern part of the country.

“It is curious that a train carrying almost 1000 passengers can be exposed to the kind of situation we found, on the fateful Monday evening, without any precautionary measures taken.

“It would be recalled that, some few months ago, there was a blast on the same route, and the government’s promise to take a concrete measure to avert any future occurrence, is yet to materialise.

“Moreover, the fact that both air and rail systems out of Kaduna, have been compromised, it is to be expected that a sensitive government should protect the only route (Kaduna/Abuja highway),” the ACF said.

Saraki tweeted: “Drastic and decisive steps need to be taken to review our nation’s basic security infrastructure to protect lives and property

“One, the Federal Government must immediately establish an inter-agency task force that will formulate strategies to smoke out all bandits on the Kaduna-Abuja rail and vehicle routes.”

“Two, the Service Chiefs must have a meeting and develop an immediate plan for inter-agency collaboration.

“The gaps in coordination, intelligence-sharing, and synergy amongst our security agencies must be immediately redressed.

“Three, we must adopt 21st-century solutions to our present-day problems. We must make better use of technology to track the activities of these terrorists.

“We must equip our security operatives with the modern tools and equipment that they need to keep us all safe.

“Four, we cannot view these attacks in isolation. Our intelligence network must be proactive.

“We must be able to analyze and plan effectively to deal with all perceived threats and all enemies of the Nigerian people.

“Five, we must show the strength of the Federal Republic of Nigeria by making sure that our Police, DSS, and Armed Forces immediately find, apprehend and prosecute all those that planned, participated, or facilitated these attacks in any way.”