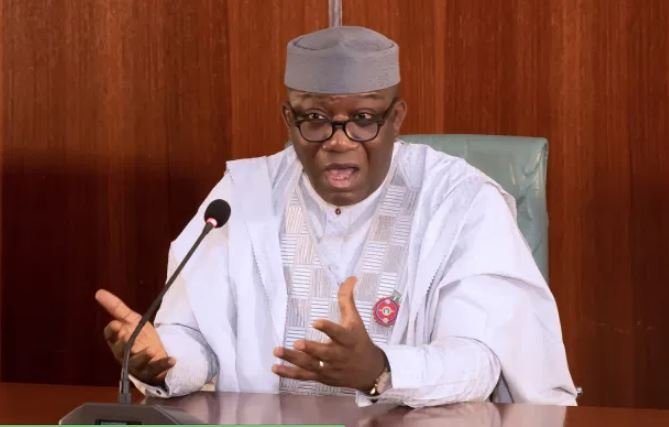 The Chairman, Nigeria Governors’ Forum (NGF), Governor Kayode Fayemi of Ekiti State, on Thursday explained that security votes collected by state governors are used to support security agencies and their operations to enhance security in the states.

Fayemi stated this while speaking as a panel discussant during a two-day multi-stakeholders meeting on the “Peace and Inclusive Security Initiative”, organised by the NGF in partnership with the Center for Democracy and Development (CDD) in Abuja.

Fayemi, responding to questions on what the governors do with security votes and why they are against local government autonomy, said not all governors collect security votes.

“Security vote has a history. And I will urge you to look for a book by Chief Jerome Ugoji – “Serving three masters. You will find in that book the origins of security votes in Nigeria.

“You say what do we do with it? Without mincing words, I can’t speak for others, but I also get feedbacks from other states in my capacity as chairman of the governors forum.

“There is hardly any of these institutions that you are talking about that we do not fund. We fund the police.

“Quote me, State governors fund police more than the Federal Government. We buy them vehicles. We pay them allowances. In some cases we even buy ammunition’s, of course under the authority.

“And if we are to engage our Military in aid to civil authority, which you will find actually in 36 states in this country, we fund it.

“Today, the military is involved in internal security operations, which really is a problem, because for me, when you inflate the role of the security institution, beyond its primary responsibility, you also have consequences that will come with that. That may not be palatable.

“But that is where we are, because most Nigerians don’t trust police. They will still come and beg governors to say ‘can you ask the brigade commander to put a roadblock in my area.”

Fayemi said sometimes ordinary citizens insist that governors should engage soldiers even though military roadblocks could not be set up everywhere because the number of soldiers is limited.

“If you engage the military, in a civil authority, your state is responsible to pay for the operations of the men that are engaged in that activity and not expect the military also to share that burden because that is not their primary responsibility.

“You have taken them out of their primary responsibility, you have to pay for it. So we pay for that, we pay for Civil Defense.

“There is no security institution that you have that states are not responsible to more than the Federal Government that has primary responsibility for them.”

He said the belief of the NGF is that local government autonomy is the business of the state.

He added that while the clamour for local government autonomy is a populist demand, he does not think it serves the purpose that they want it to serve because of capacity challenges, experienced both at state and local government level.

Speaking on the perception that state police could be abused, Fayemi said that what he suggested was multi-level police system – at the Federal, State and Local Government levels.

Fayemi who said there is possibility of abuse of police at any level, added that there are mechanisms in the constitution to protect citizens rights.

“In most countries where you have multi-level policing, there is a regulatory authority that is responsible for punishment, and sanctioning those who go beyond their own responsibilities.

Earlier in his opening remarks, Fayemi said that the level of insecurity across the country has not only jeopardised citizens’ safety and means of livelihood, but also impeded the exercise of the rights of Nigerians.

The Ekiti governor noted that this had impeded particularly the right to life and the right to movement, and ultimately the country’s socio-economic development

He, however, said that how well the country responded to the security challenges would be determined by the level of collaboration between state and non-state actors.

“It is in recognition of this that we have invited the Security Agencies, Civil Rights Organisations, Faith-based, and Traditional Institutions here represented in this summit.”

Fayemi said the meeting was convened to harness peoples’ views and make policy recommendations towards addressing the security challenges faced in the different geopolitical zones of the country.

He pledged the NGF’s support for any effort to create a more inclusive and collaborative platform to mobilise an immediate national response to the country’s security challenges.

The Governor of Plateau State, Simon Lalong, who was also the second discussant, said that supporting multi level policing is different from supporting state police.

Lalong, represented by his Deputy, Prof. Sonni Tyoden, said that the existence of vigilantes is an aspect of multi policing, which Nigeria had not been able to get the best from.

“This is because the vigilantes have not been really treated as part of the security structure we operate. And I think that is what we need to do.

“The existence of vigilante groups is a manifestation of the disenchantment with the existing security apparatus.

“I think if we model the vigilantes properly, incorporate them into the security structure, I think we will get something better out of it,” he said.

A Senior Fellow at CDD, Prof. jubril Ibrahim, in his remarks, said the centre was conscious of the fact that a lot of consequences of the insecurity in the country fell on the state.

He said that the centre also recognised the efforts by state governments to address the challenge.

He said that the CDD is engaged in researches on the dynamics of insecurity at the grassroots level, what was been done to address it, suggestions on ways forward and other programmes.

The News Agency of Nigeria (NAN) reports that highlights of the event include the launching of a report titled “Multiple Nodes, Common Causes: National Stakeholders of Contemporary Insecurity and State Responses in Nigeria”, written by the CDD.