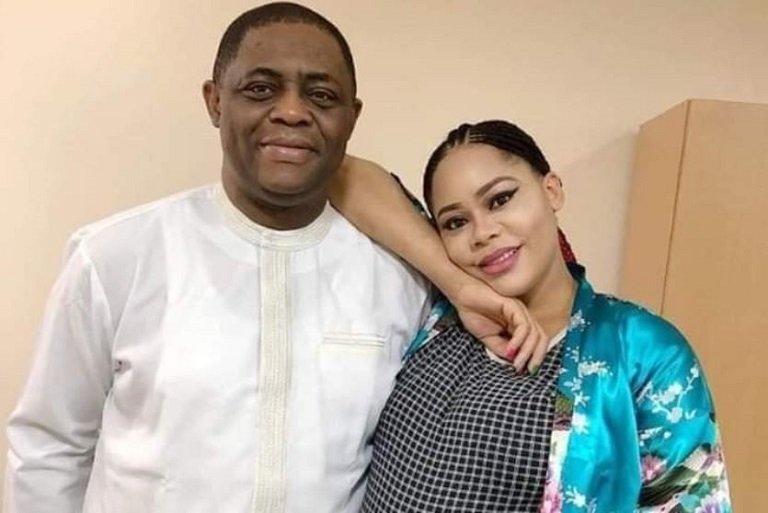 The ex-wife of former Aviation Minister, Femi Fani-Kayode, Precious Chikwendu, was on Thursday docked for cyberstalking.

Chikwendu was arraigned before Justice Obiora Egwuatu at the Federal High Court, Abuja.

She, however, pleaded not guilty to the charge after it was read to her.

Following her not guilty plea, the prosecuting counsel, Mr Victor prayed the court for a date to commence trial and also prayed the court to remand Chikwendu in the Correctional Centre in Kuje.

He said the defendant should be remanded pending the hearing and determination of the matter.

However, counsel to Chikwendu, Mr Alex Ejesieme, SAN, opposed the application describing it as funny.

“I am surprised that counsel is making this funny application,” Ejesieme said.

The senior lawyer told the court that he had filed an application for bail and that the prosecution had been served.

He said the prosecution only served him their counter affidavit on Wednesday and he had replied with a further affidavit and a reply on points of law.

He claimed that the late service of the counter affidavit by the prosecution was a ploy to have his client remanded in prison.

Ejesieme argued that the prayer that Chikwendu should be remanded in prison was uncalled for since she had never breached the terms of the administrative bail granted her by the police.

“That is why I am saying it is funny since the defendant has been on administrative bail,” he said.

He further argued that Chikwendu was a mother of four and urged the court to admit her to bail based on the earlier administrative bail granted her by the police.

Okoye prayed the court to refuse the bail application filed by Ejesieme on behalf of Chikwendu.

He argued that she had conducted herself in a way that undermined the Administration of Criminal Justice Act, citing paragraphs 5 to 9 of his counter affidavit.

The prosecutor said that even when the charge was already in court, Chikwendu had been making publications to suggest that the criminal administration act was bias.

He urged the court to exercise its discretion in favour of the prosecution.

He described Chikwendu’s averments as extraneous, especially the matrimonial claim.

He claimed that most of the 16 paragraphs in the affidavit attached to the bail application were false and misleading.

The officer argued that contrary to paragraph 8 of Chikwendu’s affidavit, she failed to appear in court on Jan. 24 when the case was slated for arraignment even though she had been served with the charge.

“Moreso, the defendant is suspected to still be engaging in criminal activities in the similitude to the one she is charged with herein necessitating further investigation into her activities,” Okoye said.

Okoye posited that refusing the bail application would not impair the defendant’s preparation for her trial in the case as she would always have access to her counsel.

He urged the court to refuse Chikwendu’s bail plea saying that the prosecution was ready to prosecute the case expeditiously as all the witnesses are within jurisdiction.

Justice Egwuatu, however, said that he found no reason to deny Chikwendu bail.

“I have painstakingly read the opposition to the bail application and I have not seen any reason to deny her bail.

“On the contrary, the defendant has deposed that she will not jump bail and that she was granted administrative bail by the police and she never breeched the terms.”

The judge subsequently admitted Chikwendu to bail in the terms of the administrative bail earlier granted her by the police.

He adjourned the matter until June 7 for commencement of trial.

The News Agency of Nigeria (NAN) reports that Chikwendu, an ex-beauty queen, was, on Feb. 14, docked before a sister court presided over by Justice Inyang Ekwo for attempted murder of her former husband, Fani-Kayode.

In a charge number: FHCABJ/CR/1/2022 filed by the Commissioner of Police, FCT Command, against Chikwendu and three others, she was said to have attempted to stab Fani-Kayode with a kitchen knife on Nov. 24, 2018 at Asokoro.

Others arraigned alongside Chikwendu in the 13-count charge dated and filed Jan. 7 were Emmanuel Anakan, Prisca Chikwendu and Osakwe Azubuike as 1st, 3rd and 4th defendants, while others were said to be at large.

They, however, pleaded not guilty to all the charges.

Justice Ekwo had fixed April 27, April 28 and April 29 to begin trial
NAN reports that Chikwendu, who was accused of infidelity by the former minister, was also said to have withdrawn various civil cases filed against Fani-Kayode.

The former minister said Chikwendu had always been given access to her children under closed supervision due to her alleged mental challenges which could result to hurting the children.

The former minister had also alleged that Chikwendu stopped calling the children on telephone for about seven months now contrary to her habit in the past.

An Abuja Magistrate Court in Wuse Zone 2 had, also recently, restrained the ex-wife from making comments that could lead to the identification of the children whose custody issues had been submitted before it for determination.