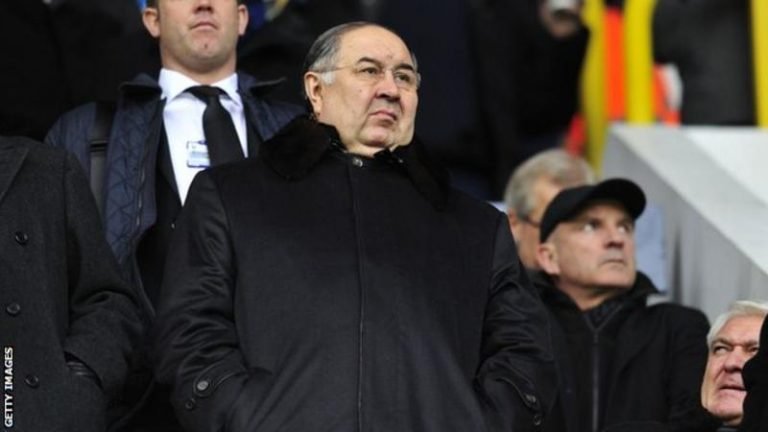 Everton have suspended their commercial sponsorship arrangements with Russian companies owned by Alisher Usmanov following the invasion of Ukraine.

Russian billionaire Usmanov has had his assets frozen by the European Union.

Usmanov-owned USM Holdings, which has Everton owner Farhad Moshiri as its chairman, sponsors the training ground.

Usmanov also has an exclusive naming-rights option on Everton’s new stadium which is due to open for the start of the 2024-25 Premier League season.

Digital and telecommunications company Megafon is owned by USM and sponsors Everton women’s shirts. The multi-year deal was agreed in October 2020, while Yota, part of the Megafon group, is on the sleeve of the shirt.

“Everyone at Everton remains shocked and saddened by the appalling events unfolding in Ukraine,” a club statement said.

“This tragic situation must end as soon as possible, and any further loss of life must be avoided.

“The club can confirm that it has suspended with immediate effect all commercial sponsorship arrangements with the Russian companies USM, Megafon and Yota.”

Everton added that it was doing all it can to provide “full support” to Ukrainian defender Vitalii Mykolenko, who joined the Toffees in January.

The EU Council said it was freezing Usmanov’s assets because he is “a pro-Kremlin oligarch with particularly close ties to Russian president Vladimir Putin”.

On Tuesday, Usmanov made a statement on the website of the International Fencing Federation, an organisation of which he is president, calling the EU’s decision to impose restrictions on him “unfair” and pledged to “use all legal means to protect my honour and reputation”.

Swiss billionaire Hansjorg Wyss claims Abramovich “wants to get rid of Chelsea quickly” after the threat of sanctions was raised in Parliament and has been offered the chance to buy the club.

The United Kingdom government is yet to sanction Abramovich or Usmanov.