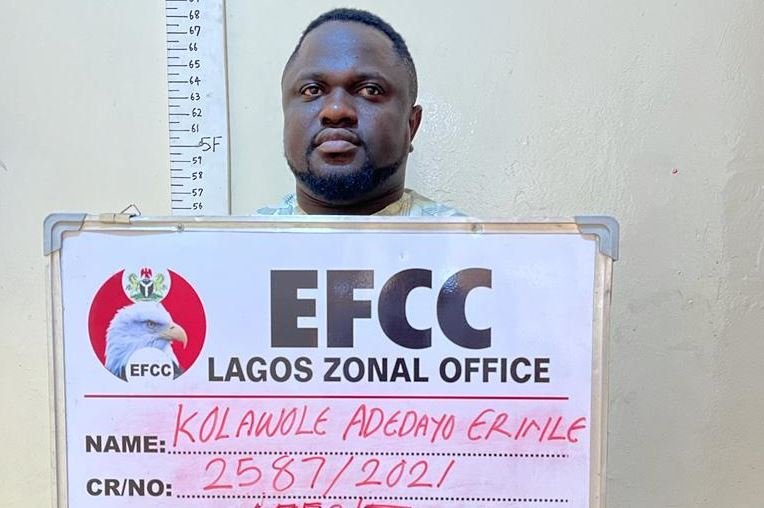 The Lagos Zonal Command of the Economic and Financial Crimes Commission, EFCC, on Friday, March 11 arraigned one Kolawole Adedayo Erinle alongside his firm, Rinde-Remdex Nigeria Limited before Justice Oluwatoyin Taiwo of a Special Offences Court sitting in Ikeja, Lagos on an amended three-count charge bordering on conspiracy, retention of proceeds of criminal conduct, and obtaining money under false pretence to the tune of $1,410,000 (One Million Four-Hundred and Ten Thousand United States Dollars).

The defendant is alleged to have engaged in Business Email Compromise, BEC, fraud to defraud his victim. The fraudulent case, which was reported to the EFCC by the Federal Bureau of Investigation (FBI), alleged that in 2019, Kansas City University of Medicine and Biosciences (KCUMB), transferred $1,412,509 USD to an account believed to be that of a contractor.

Investigation into the alleged crime, however, revealed that the defendant benefited the fund, which was transferred in two tranches to a company in Nigeria. The defendant on receipt of the fund, disbursed it to his wife, mother and cronies. The proceeds were further traced to fixed deposits, assets; landed and vehicular, that he purchased.

One of the charges reads: “Kolawole Adedayo Erinle and Edward Dada (still at large), sometimes in 2019, at Lagos within the jurisdiction of this Honourable Court conspired to falsely represent yourselves as J.E. Dunn, a local construction company in America, with intent to gain monetary advantage in the sum of $1,410,000 (One Million Four-Hundred and Ten Thousand United States Dollars) by creating a fake domain name jedunn.org and thereby committed an offence contrary to Section 8 of the Advance Fee Fraud and other Related Offences Act No 14, 2006.”

Another count reads: “Kolawole Adedayo Erinle, Rinde-Remdex Nigeria Limited and Edward Dada (still at large) on or about the 3rd day of May 2019 at Lagos within the jurisdiction of this Honourable Court retain the control of $1,410,000 (One Million Four-Hundred and Ten Thousand United States Dollars) in your Access Bank account which sum you knew to be proceeds of various internet and cybercrime.”

He pleaded “not guilty” to the charges.

Thereafter, the prosecuting counsel, T.J. Banjo prayed the Court for a trial date and for the remand of the defendant at a Correctional Facility.

Defence counsel, Yinka Farombi, who informed the Court of the bail application for his client, however, prayed the Court to remand him at the EFCC custody pending hearing of the application.

The application for his remand at the EFCC custody was however opposed to by the prosecution on the grounds that after arraignment the “right place of custody is the Correctional Centre”.

Thereafter Justice Taiwo adjourned till March 15, 2022 for “hearing of bail application” and ordered that the defendant be remanded in EFCC custody till then.

Wike fires back at Obaseki, says he’s a betrayal