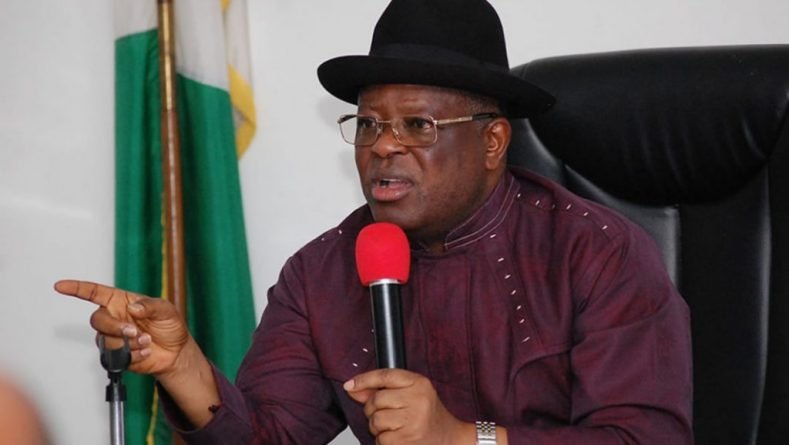 A Federal High Court in Abuja, Nigeria’s capital has ordered the Governor Dave Umahi of Ebonyi state and his deputy, Eric Igwe, to vacate their seats on grounds that it was the Peoples Democratic Party (PDP) that won the March 2019 governorship election and not the candidates.

Justice Inyang Ekwo said having defected to the All Progressives Congress (APC), Umahi and Igwe cannot transfer their mandate from PDP to APC.

Citing section 221 of the constitution, Justice Ekwo ordered the PDP to immediately send names of replacements to INEC so that fresh elections can be conducted.

Justice Ekwo also ordered the Independent National Electoral Commission (INEC) to cease from recognising Umahi and Igwe as the governor and deputy governor of the Ebonyi State.

Delivering judgement in the case, the presiding judge, ordered the governor and his deputy to vacate office, adding that, their defection was illegal, null and unconstitutional.

He ordered INEC to receive names of candidates from the PDP to replace Umahi and Igwe.

The governor and his deputy defected from the PDP on whose platform they were elected into office in the 2015 and 2019 general elections to the APC.

Determined to reclaim its mandate, the PDP sued the Umahi, Igwe, the APC and INEC.

Justice Ekwo said the depositions of the 3rd and 4th Defendants in their counter affidavit were “evasive and insufficient” to competently challenge the Plaintiff’s originating process.

It was the opinion of the court that the “Immunity Clause” in section 308 of the Constitution is not absolute.

The court ruled that “Section 308 is a veritable constitutional shield” and not for political reasons.

Justice Inyang said Umahi and Igwe did not controvert the deposition that total votes scored in an election belong to a political party.

He stated that evidence abound that the 2nd defendant (APC) contested the Ebonyi State Governorship election held on March 2019, with its own candidates.

“It can be noted that the Constitution does not deal with the issue of defection lightly,” the court stated.

“The 3rd and 4th Defendants cannot transfer the votes and victory of the Plaintiff on March 9, 2019, to the APC. Office of the Governor and Deputy Governor of Ebonyi state belongs to the PDP.

“The option for Umahi and Igwe is to vacate office and wait for next election to contest election under the platform of its new party,” the court declared.

The court said the act of the APC, Umahi and his deputy is aimed at dismantling the 1999 Constitution.

Consequently, the court declared that under the democratic system operated in Nigeria, the plaintiff won the majority of votes during the election and is entitled to enjoy same till end of tenure of office for which the election was made.