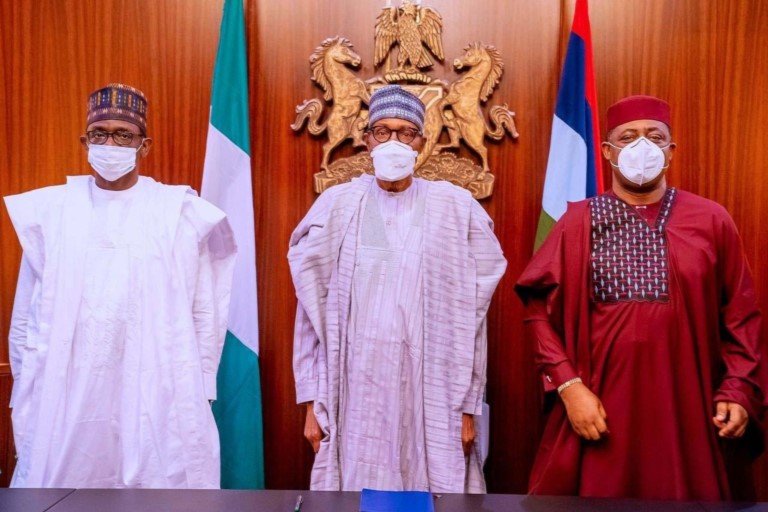 The ousted caretaker chairman of the All Progressives Congress (APC), Mai Mala Buni, is due in London to confer with President Muhammadu Buhari, it was learnt last night.

Buni is expected to rush back home on Wednesday from Dubai, United Arab Emirates, where he went for medical checkup, had a rethink.

“He will now travel to London to meet with President Muhammadu Buhari on the situation in the party,” a source said.

Attorney-General of the Federation and Minister of Justice Abubakar Malami (SAN), it was learnt, had arrived in London also to meet with the President.

Another official listed to meet with the President is Central Bank of Nigeria (CBN) governor, Godwin Emefiele.

Ahead of his London trip, there was a leak of Buni’s letter, which faulted Governor Nasir El-Rufai’s narratives on how Buni was removed as chairman of Caretaker Extraordinary Convention Planning Committee (CECPC).

A source, who spoke in confidence, said the APC crisis has shifted to London with Buni struggling for survival.

Attorney General of the Federation and Minister of Justice, Abubakar Malami

The source added: “Instead of coming home, Buni went London to state his own side of the crisis in the party and hear from the President on whether or not he directed that he should leave office. He has also gone there with facts and figures on the situation of the party.

“He has insisted that no verbal or written directive was given to him by the President. He said he cannot depend on third party information. He wants to know his fate directly from the President.

“I think Buni and his backers have succeeded in breaking some protocol barriers to see the President, who has been under pressure to hear the other side to APC crisis.

“Buni confided in some governors and few loyalists that he would clarify a few things in London including court injunction to halt the convention and defiance of presidential directives on the reform of the party.”

In Buni’s letter, the Yobe State governor legally handed over the affairs of the party to Niger State Governor Abubakar Sani Bello before travelling out.

In the letter dated February 28, Buni directed Governor Bello to act in his absence as the chairman of CECPC.

A copy of the letter was sent to the Independent National Electoral Commission (INEC) and members of CECPC.

The letter reads: “This is to please inform you that I will be embarking on a medical trip to the United Arab Emirates (UAE) from today, 28th February, 2022.

“In my absence, I hereby transmit the functions of my office as the National Chairman of the Caretaker Extraordinary Convention Planning Committee (CECPC) to you.

“This is to enable the committee conclude all arrangements leading to the National Convention slated for March 26th, 2022 and other duties that may be required of the office.

“I invite all members to cooperate with Governor Abubakar Sani Bello by extending to him all the support that I have enjoyed from you.

“Please do accept the assurances of my best regards.”

However, Sani Bello denied receiving any transfer of authority letter from Buni. Speaking to reporters at the secretariat in Abuja, Sani Bello simply said: “I have not seen it.”

An aide to Buni, who spoke in confidence, said: “Buni couldn’t have been removed by anybody or a group of governors because his letter was explicit. He followed due process and nominated Bello to act for him.”

On Emefiele, a source said: “His mission was to brief the President on developments on the economy, particularly the effect of the Russia-Ukraine war on our earnings as well as the resultant huge subsidy on fuel.”

Another said: “Emefiele might discuss his perceived presidential ambition with Buhari, in view of the Senate’s rejection of President Buhari’s request to amend a section of the new Electoral Act, which precludes appointed officials of government from voting or being voted for at primaries of political parties, unless they resign.”

Malami is expected, according to sources, to discuss some constitutional and legal issues with Buhari.

Russia hits back at Western sanctions with export bans