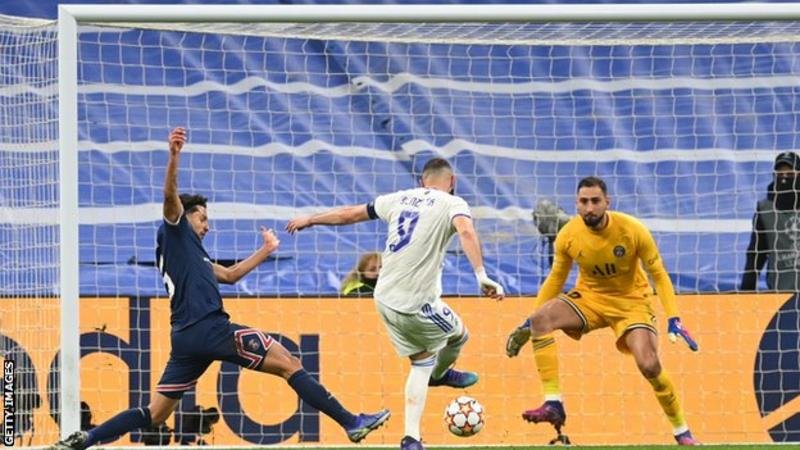 Karim Benzema scored a superb second-half hat-trick as Real Madrid produced a stirring fightback at a raucous Bernabeu to reach the Champions League quarter-finals at the expense of Paris St-Germain.

Benzema, at 34 years, 80 days became the oldest player to score a Champions League hat-trick beating the record held by compatriot, Olivier Giroud, who was 34 years, 63 days when he hit a treble for Chelsea at Sevilla in 2020.

Kylian Mbappe’s first-half goal had given PSG a deserved two-goal aggregate lead and looked to have put Mauricio Pochettino’s side well on course for the last eight.

However, a mistake by PSG goalkeeper Gianluigi Donnarumma proved the catalyst for a dramatic recovery with Benzema turning home after the Italian dawdled in possession.

Luka Modric’s driving run and intricate pass made Benzema’s second as he levelled the tie against a clearly panicked PSG, and as the visitors attempted to regroup the 34-year-old drove a low effort into the bottom right corner seconds after the restart to settle the tie.

Until Donnarumma’s error PSG had been in complete control.

Marco Verratti was slick and dominant in midfield, while Neymar and Lionel Messi worked themselves into some dangerous positions as the hosts struggled to contain their more fluent opponents.

Mbappe in particular was electric, racing on to a pass from Neymar to open the scoring against the side he has been heavily tipped to join in the summer when his contract at PSG expires.

Either side of that the 23-year-old tormented the Real defence, twice having goals correctly disallowed for offside but showing his predatory instincts nonetheless.

A surge of acceleration also saw him burst past Real’s Eder Militao and only a brilliant covering challenge from David Alaba prevented him from adding to his tally.

Mbappe’s influence was such that he received warm applause from the home support as he got up after appearing to be hurt in a tackle, but the real damage to his and PSG’s long-standing aspirations in the competition were still to come.

Benzema’s 17-minute treble ensured PSG suffered another painful elimination from a competition that has become an obsession since they moved into Qatari ownership in 2011.

And after reaching the final and semi-finals in consecutive seasons this feels like a considerable backwards step for a squad that has been expensively assembled but remains prone to monumental collapses in this competition.

This felt every bit as shattering as their 6-1 thrashing by Barcelona in 2017, their last-16 defeat by Manchester United in 2019, and was even more remarkable given they had not lost a Champions League away game after leading at half-time since 2001.

While PSG are runaway leaders in Ligue 1 and have been crowned French champions in seven of the past nine seasons, domestic success is not the barometer Pochettino will be judged by come the end of the season.

And alarmingly the Argentine and his stunned players were unable to provide any adequate response once the tide had turned in this contest.

Julian Draxler and Angel di Maria were only introduced once the Parisiens were chasing the game, and aside from a late Messi free-kick which dipped just over, they were unable to conjure a single clear-cut goalscoring opportunity as they meekly exited the tournament.

Man Utd back for Rudiger, Arsenal to re-sign Gnabry