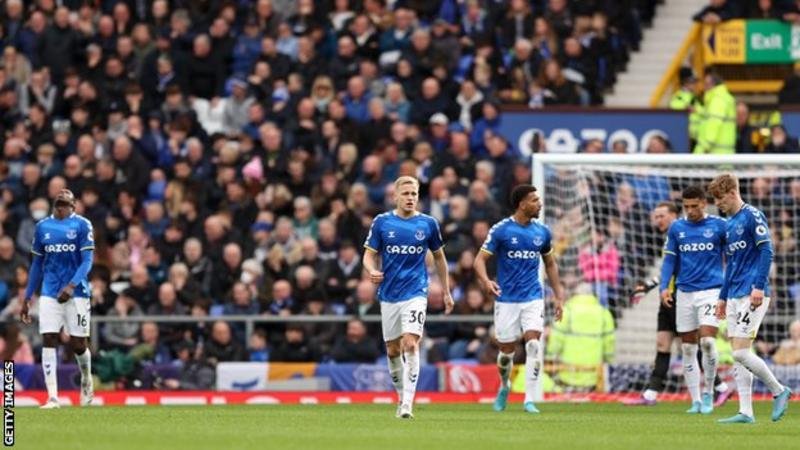 Conor Coady scored the decisive goal as other results on Sunday left Frank Lampard’s side above the bottom three only on goal difference, though they have games in hand on the teams around them.

After a scrappy first half, Wolves responded quickly and captain Coady headed past Jordan Pickford from Ruben Neves’ delivery in the 49th minute.

Everton rarely threatened after going behind and their afternoon went from bad to worse as Jonjoe Kenny was sent off for receiving two yellow cards in three minutes, forcing the hosts to play the final 13 minutes with 10 men.

Victory for Wolves takes them above Tottenham into seventh while Everton remain 17th, though wins for Watford and Leeds only increased their growing relegation fears.

Before Sunday’s game, Lampard praised Everton fans for helping inspire an upturn in home form since his arrival, but warned his players that they could not “fall into the trap” of relying too much on picking up wins at Goodison Park to get them out of trouble.

After all, the Toffees have a dismal away record, winning just once on the road this season. And defeat by Wolves was their seventh at home in the league this season.

Everton had won three of Lampard’s first four home matches as Everton boss – but two of those wins had come in the FA Cup. The Toffees have picked up only three league points under their new boss, and only bottom club Norwich, with one, have collected fewer over the same period.

Some Everton fans had seen enough after Kenny’s red card and began to filter out, but those who stuck around made their feelings clear at the full-time whistle as boos rang around Goodison Park.

In fairness, they had little to cheer about, and with Dominic Calvert-Lewin missing through illness, the spotlight fell on Richarlison as Everton’s lone striker. The Brazilian looked sharp from the first whistle and had a couple of early chances, but couldn’t find a way past goalkeeper Jose Sa.

Everton’s early momentum was checked by an incident in which Wolves’ South Korean forward Hwang Hee-chan, injured after a challenge by Donny van de Beek, went down three times, stopping the game to get treatment, before eventually being replaced by Daniel Podence on 15 minutes.

The delay caused by Hwang’s injury riled the home fans, but the first half lacked any real quality and was crying out for a moment of magic before the break. Raul Jimenez obliged, but sent his overhead kick flying high over Jordan Pickford’s bar.

In contrast to Everton’s away form, Wolves have the Premier League’s fourth best record on the road this season, behind only Manchester City, Liverpool and Chelsea.

They dominated after the break and it was Coady who found found the far corner with a powerful header from Neves’ cross to take his goal tally to three for the season.

As Everton look down the table, Wolves are still pushing for a place in Europe after their eighth away win – their best tally in a Premier League season.