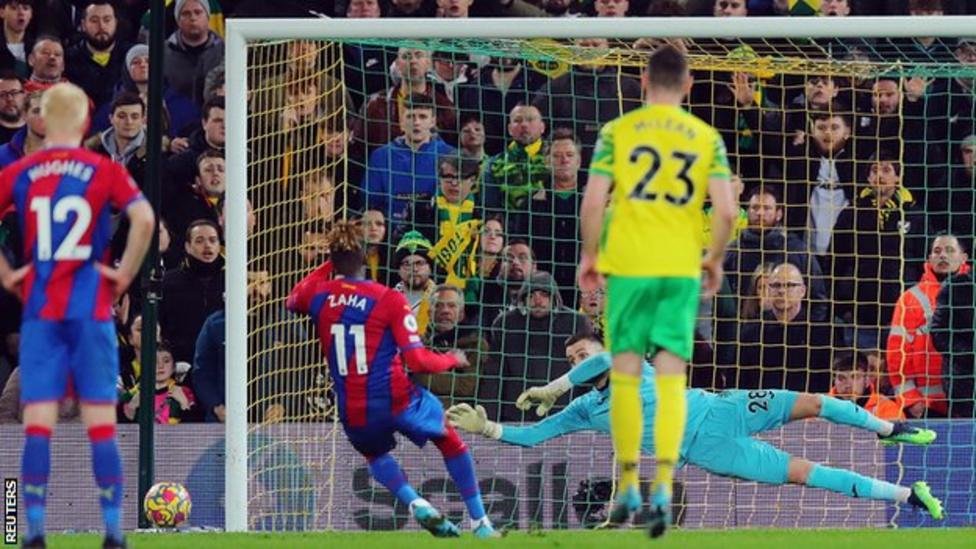 Wilfried Zaha scored and then missed with a penalty as Crystal Palace held Norwich to keep the Canaries in the relegation zone.

Norwich led through the quickest Premier League goal of the season when Teemu Pukki fired in after 38 seconds from Adam Idah’s lay-off.

The Canaries had the better chances early on but Palace improved and Jean-Philippe Mateta had a goal disallowed.

Zaha curled a beautiful effort in from the edge of the box but was guilty of one of the worst Premier League penalties ever.

He seemed to stumble as he stepped up and scuffed his kick several feet wide.

Palace had the better chances to win with Angus Gunn playing well in the Norwich goal.

On 28 December, Palace beat Norwich 3-0 to move into the top half of the table and leave the Canaries bottom.

A good run under Dean Smith had seen the Canaries move out of the drop zone until Newcastle’s win over Everton on Tuesday.

Indeed a Norwich win here would have seen only five points between them and the Eagles, who have not won a league game since then.

And early on that looked on the cards thanks to the early Pukki goal following good wing work by Milot Rashica.

It could have been 3-0 at that stage but it was mostly Palace for the final hour of the game.

Mateta’s dink over Gunn and off the inside of the post was correctly ruled out. That was a warning for Norwich that they could not heed.

Zaha got the ball on the wing, cut in and curled the ball into the far corner from 20 yards.

He is one of only two players to score a Premier League goal for a single club in every calendar year since 2014, alongside Harry Kane for Tottenham.

But his penalty, won for Max Aarons’ foul on Mitchell, will probably live longer in the mind as it went well wide.

Still Palace had plenty of chances to win with Will Hughes’ deflected volley and Conor Gallagher’s low free-kick kept out by Gunn.

Their wait for a first league win in 2022 goes on.