Wolves beat Tottenham to close in on top four
Advertisement 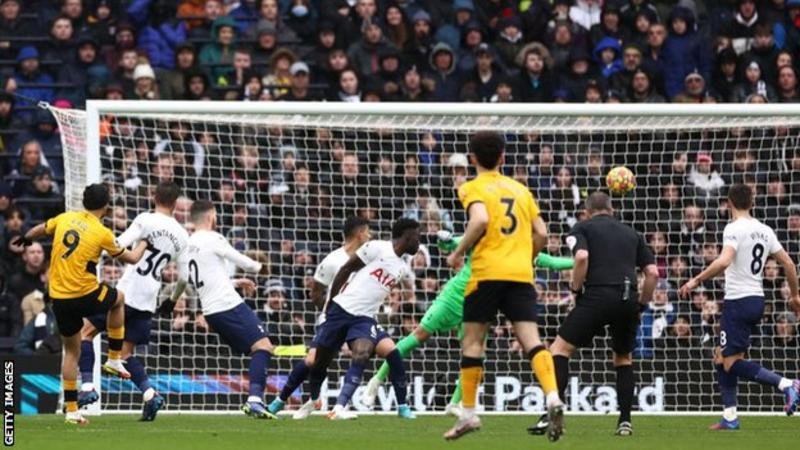 Wolverhampton Wanderers comfortably beat Tottenham Hotspur to move above them in the table and inflict a third successive Premier League defeat on Antonio Conte’s side.

Tottenham gifted the visitors two goals in the opening 20 minutes thanks to a mixture of calamitous defending and poor goalkeeping by Hugo Lloris in north London.

Raul Jimenez capitalised on a weak Lloris punch to volley in the opener before Spurs gave away possession to allow Leander Dendoncker to double Wolves’ lead.

Bruno Lage’s side were good value for their win and they managed the game well after taking the lead while also testing Lloris on a number of further occasions.

It is the first time Conte has lost three league games in a row since his days managing Atalanta in November 2009.

Wolves climb to seventh and are now just three points off fourth-placed West Ham United in the final Champions League spot with a game in hand.

Despite their solid form Wolves have struggled for goals this season and arrived at the Tottenham Hotspur Stadium with only Burnley and Norwich having scored fewer times in the league.

They have one of the division’s best defensive records but that lack of ruthlessness has cost them points – as it did in the 1-0 defeat by 10-man Arsenal on Thursday – so Lage’s side will have welcomed the hosts’ early generosity.

It was from Wolves’ first attack that Lloris palmed out a fizzing Ruben Neves effort, but he then weakly jabbed Dendoncker’s follow-up into Jimenez’s path and the Mexico striker coolly finished.

The visitors soon added a second when loose passes from Lloris and Ben Davies in quick succession turned over possession and Dendoncker pounced after the ball ricocheted off a number of defenders and the post and fell into the Belgium midfielder’s path.

Spurs captain Lloris made partial amends for his earlier errors with a good stop from the dangerous Daniel Podence from distance and was out quickly to deny Jimenez early in the second half to prevent Wolves extending their lead.

The visitors had to deal with growing pressure from the home side as the game progressed but did so confidently as Jose Sa claimed his ninth clean sheet of the season.

The Champions League may feel like an unlikely target for Lage, who got the better of a manager he called “one of the best in the world”, but with no team taking control in the race for fourth spot his side have edged their way into contention.

Conte left with plenty to do

Tottenham needed to return to winning ways in the Premier League to stop their own Champions League hopes fading further after successive defeats, but they were left to rue another fragile and ill-disciplined defensive performance.

Conte has won four league titles since he last managed a side that lost three league games on the bounce more than 12 years ago, and this run comes after a promising start under the Italian that saw Spurs go unbeaten in nine league games.

He switched both wing-backs following the defeat by Southampton on Wednesday but in the 28th minute, at 2-0 down, withdrew Ryan Sessegnon for new signing Dejan Kulusevski in order to change to a more attacking shape.

Fellow new arrival Rodrigo Bentancur got his first start, after showing promise in a couple of cameos last week, and the Uruguay midfielder slid Son Heung-min through on goal In the first half only for the South Korea forward to delay and give Wolves goalkeeper Sa a comfortable save.

The hosts did improve after Conte’s tactical switch, at least in an attacking sense, but Wolves dealt with the threat relatively comfortably, despite Harry Winks skimming the post with a deflected effort from outside the box.

Substitute Kulusevski also volleyed wide and Sa made a strong stop from Cristian Romero’s header as Spurs pressed late on.

There was to be no comeback for Conte’s men though and now the Italian has the task of coming up with a way to end his side’s losing run at league leaders Manchester City next Saturday.