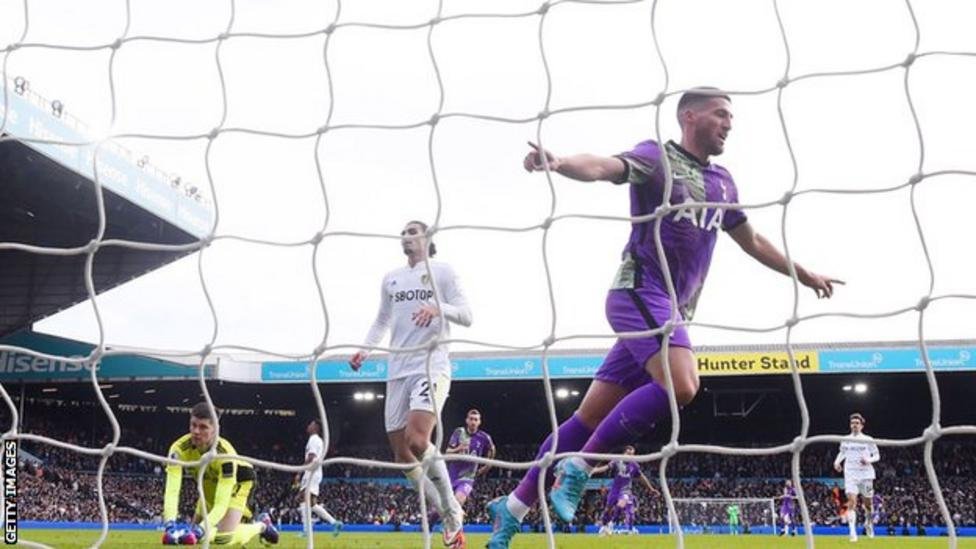 Leeds suffered another damaging defeat in their bid to avoid Premier League relegation as Tottenham secured a dominant victory at Elland Road.

Marcelo Bielsa’s struggling side fell behind after just ten minutes when Ryan Sessegnon broke clear down the left and delivered a perfectly weighted cross for Matt Doherty to sweep home.

Dejan Kulusevski drilled in the visitors’ second before Harry Kane’s composed finish made it 3-0 on the half-hour mark.

Son Heung-min compounded Leeds misery in the second half when he latched on to Kane’s ball over the top of the home defence and beat Illan Meslier with a smart finish.

Robin Koch and Raphinha struck the woodwork for Leeds and Stuart Dallas should have scored a consolation prior to Spurs’ fourth, but the hosts rarely looked capable of forging a route back into the game as Spurs continued to carve out opportunities on the counter-attack.

The result lifts Tottenham to within four points of fourth-placed Manchester United, while Leeds remain three points above the bottom three. They could drop into the relegation zone if other results go against them on Saturday.

Leeds carved open at will

Bielsa insisted prior to Saturday’s game that he had no intention of walking out on the club, despite being “very worried” about his team’s poor recent form.

This latest defeat – which was almost embarrassingly one-sided in the first half in particular – will do little to ease those concerns.

Tottenham carved Leeds open at will in the early stages, their 3-0 lead after just 27 minutes a fair representation of their dominance.

It could have been 4-0 just after the half-hour mark, but Sessegnon fired straight at Meslier’s legs from a tight angle.

Boos rang out around Elland Road at half-time – although the home fans continued to sing in support of their team in the second half – with the game as good as lost.

Leeds, predictably, had chances of their own, although the majority came after they had gone 3-0 down. Koch rattled the post with a side-footed effort in the first half, while Luke Ayling sent a header narrowly wide of the top corner as the hosts pushed for a goal back before the break.

Dallas should have got his team on the scoresheet after rounding Hugo Lloris, before Raphinha was denied by the woodwork from a trademark free-kick.

Bielsa’s side have now conceded 60 league goals this season – five more than bottom club Norwich – and 20 in February alone. They are only the second team in Premier League history to ship three or more goals in five consecutive matches.

The Argentine says abandoning Leeds’ all-action style in favour of a more pragmatic approach is not an option, but it is hard to see the club arresting their dreadful form without a change of system.