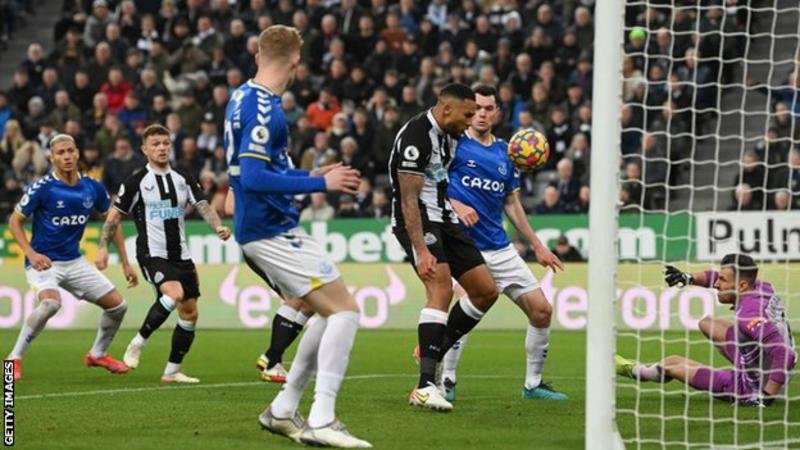 Newcastle moved out of the bottom three with a huge win over fellow strugglers Everton in Frank Lampard’s first Premier League game in charge of the Toffees.

Eddie Howe’s energetic side were superior to their visitors as they earned successive wins for the first time this season with a performance which will give them hope they can avoid relegation so soon after their takeover.

Despite going behind to a Jamaal Lascelles own goal after Jonjo Shelvey was fortunate to receive only a yellow card for a challenge on Anthony Gordon, Newcastle responded within 108 seconds through another own goal.

Mason Holgate, who had a hand in Everton’s opener, then returned the favour by scoring into his own net after Lascelles’ header crashed off the bar.

Newcastle created further chances and after half-time Ryan Fraser put Newcastle in front when he poked in following excellent work by Allan Saint-Maximin.

And the gloss to a brilliant performance, largely without new signing Bruno Guimaraes, was added by Kieran Trippier’s 25-yard free-kick.

It could have been even better had Jacob Murphy not hit the post late on, but this was a display which was as encouraging for Newcastle as it was worrying for Lampard.

Both Dele Alli and Donny van de Beek were introduced from the bench but they had little sway over a well-drilled Newcastle side, who move up to 17th.

They now sit a point and a place behind Everton, who have been sucked into a relegation battle and face another huge test against Leeds on Saturday.

Newcastle hope to have turned a corner

Newcastle fans have had their hopes tested and their nerves frayed over the course of the season which has ebbed and flowed following the club’s £305m takeover in October.

Eddie Howe is optimistic Newcastle will survive the drop

But back-to-back wins and exiting the bottom three for the first time since the autumn led to celebrations at the full-time whistle, which felt like a corner had been turned.

In the win against Leeds before their trip to Saudi Arabia, Howe’s side had to hang on, but this was a much-improved display compared to 17 days ago, and they could and should have scored more.

The Newcastle boss said his team were a fitter outfit after returning from their training camp in Saudi Arabia and it showed.

They pressed Everton from the start, leading to errors in the visitors’ backline, and although there was disappointment that new signing Guimaraes did not start after his £40m move from Lyon, the hosts’ midfield was a well-oiled unit.

Even though Newcastle went behind in the most unfortunate circumstances to Lascelles’ own goal, it said much about the captain that he played a key part in the equaliser, especially after coming under pressure from new signing Dan Burn.

Crucially, it meant that Newcastle were behind for less than two minutes, and they should have gone ahead before half-time when Chris Wood wasted a free header and Joelinton somehow slipped with the goal at his mercy after more wizardry from Saint-Maximin.

But the French winger continued to show his star quality after the break when he dribbled through the Everton defence before his lofted cross made its way to Fraser, who sent Howe and the majority of the supporters wild.

There was a crowning moment still to come, however. Trippier, Newcastle’s first signing of the transfer window and a statement signing in many regards, stepped up to fire in a delicious free-kick to give the home fans breathing space and an exultant feeling that Premier League survival looks more likely.

Everton dragged into a dogfight

Lampard had tried to urge calmness from his side heading into a pivotal week where they faced Newcastle and Leeds, but following a feel-good win against Brentford in the FA Cup last Saturday, this result brought Everton back down to earth.

Two wins in 16 matches tell of a side short of confidence after Rafael Benitez’s unsuccessful reign, and they will need to show greater resilience in what will now be a fight to avoid relegation.

The squad that Lampard inherited has been boosted by the additions of Alli and Van de Beek, who both made their debuts, but they will need to find a rhythm soon as Lampard seeks to employ a more creative approach to the side.

Gordon was their most impressive player in a frantic first half, and it was his free-kick that set up their goal.

But there were two key moments in the build-up to that which Lampard may refer to as turning points in the game.

Having already lost Demarai Gray to injury, Yerry Mina was forced off as Gordon attacked down the left. And subsequently Shelvey was fortunate to stay on the pitch after wrapping his legs around the Everton winger.

Being unable to hold onto the lead will have been a disappointment, too, but other than half chances for Richarlison, and a Gordon shot which was saved, opportunities were rare.

Jordan Pickford did well to keep his cool after a barrage of abuse from the Newcastle fans and made a brilliant save to deny Joelinton.

But Everton’s poor evening was summed up when the former Sunderland keeper made a hash of a clearance, which led to even worse from Jarrad Branthwaite, resulting in a corner which the home support relished.