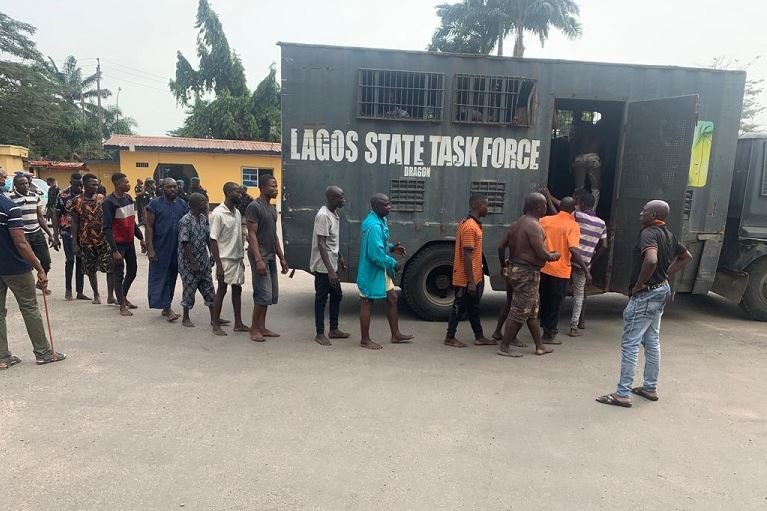 In order to rid Lagos state of criminal elements who rob commuters in traffic at Ikeja Along down to Ile-Zik and its environs, the Lagos State Taskforce has demolished shanties and removed canoe monuments which served as a hideout for suspected criminals.

The activities of these criminals was disclosed to the agency through series of complains by innocent members of the public.

Commuters who constantly ply that axis claimed that suspected traffic robbers after carrying out their illegal acts usually run into the canoe monument erected to beautify the city but being used by criminals as a hideout and leeway to avoid being caught by the long arm of the law.

Other supposed safe havens for criminals were also demolished along that axis.

Also in line with the Lagos State Government resolve to ease the pains of Lagosians who spend long hours in traffic due to the incessant display of wares by traders along some of the highway corridors of the State, the Lagos State Taskforce in collaboration with its sister agency, Lagos State Environmental Sanitation Corps (KAI) today carried out an extensive exercise to clear up the drive ways along the State and prevent the indiscriminate disposal of waste by the market men and women and reduce man hours spent on the roads as a result of traffic congestion caused by their activities.

The clearing up exercise at Mushin/Olosha which was spear headed by the chairman of the Lagos State Taskforce, CSP Shola Jejeloye, lasted for about three hours to ensure that the exercise was thorough and effective in order to prevent the return of the traders to the same spot after completion.

The chairman explained that this had become necessary and inevitable as Lagosians had thrown in series of complaints through various channels asking the State Government to come to their aid to put a stop to the selfish actions of roadside traders which had become a norm in that axis.

Jejeloye highlighted that “Mushin/Olosha axis has been known for this practice for quite a while even before the completion of the road leading to Oshodi.

“We have appealed to traders to desist from displaying their goods on the road side and on the walkways but it has fallen on deaf ears, hence the need to clear them out forcefully.

The chairman further said that the exercise will be a continuous one as officials of both Agencies will continually monitor the major Highways and inner roads to prevent a return of traders to the roadside.

“it will be continuous and also be extended to other parts of the State. The traffic caused due to the partial closure of the Roads by these traders creates serious backlogs to adjoining roads and also gives room for traffic robbery. We won’t condone this economic waste anymore. Any one that wants to display his/her wares or sell goods should move into the main market complex or he risks being arrested” Jejeloye noted.

In a similar development, The Chairman of the Lagos State Taskforce, CSP Shola Jejeloye proceeded with his men to Costain/Iponrin axis of the State where 84 okadas were impounded for flouting the State Governments laws guiding their operations.

CSP Jejeloye who had vowed to clampdown on recalcitrant okada riders plying restricted routes in the State flouting traffic laws insisted that no stone would be left unturned until all okada riders tow the line of best practices and ensure that sanity is entrenched in the system.

Jejeloye indicated that “I have said it before and I will say it again that the clamp down on all recalcitrant okada riders in Lagos will not stop until they start to behave well and comply with State laws guiding the okada operations.

“Driving on the state highways is prohibited to okada below 200cc engine capacity, but you see a lot of them plying these routes with total disregard for the law. We will keep impounding their okada and vehicles driving against traffic till they learn to obey traffic laws of the State”

Meanwhile, the agency in her bid to stop the ugly incidents of robbery, arson, and illegal activities in the state had arrested over 12,429 suspects in the year 2021, out of which 11,412 were charged to court.

A total number of 10,959 were eventually convicted and fined for various offences while 166 of them were cautioned and discharged.

The chairman of the agency CSP Jejeloye admonished members of the public that the fight against making Lagos great again is not only for the Agency alone but for the generality of all Lagosians. All hands must be on deck to fish out criminal elements amongst us and report any cases of criminal activities around us