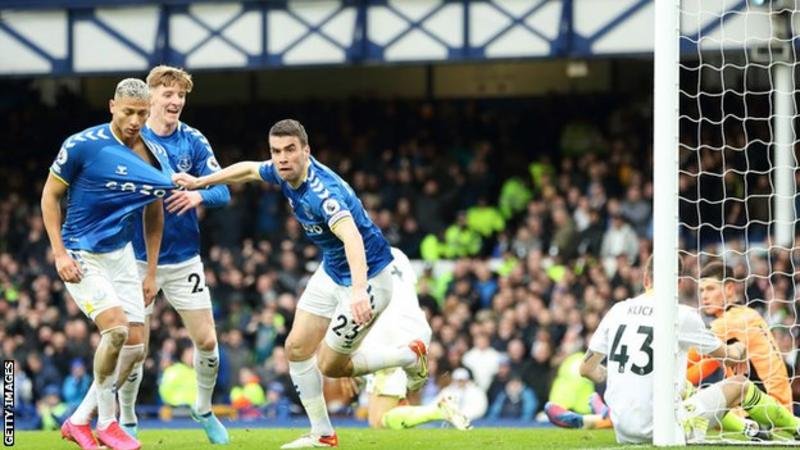 Manager Frank Lampard described Everton‘s performance as “special” as he claimed his first Premier League win with his new club in a dominant victory against Leeds United.

The win means the Toffees are now five points clear of the relegation zone after ending a run of six league games without a victory.

Goodison Park was rocking at full time and Lampard’s name was chanted around the stadium throughout the second half as they cruised to victory.

“It was an incredible afternoon. What we did today was something special in terms of the performance. It showed an attitude, aggression and work-rate,” Lampard told BBC Sport.

“I can see the talent. Individually you go through the team and there’s ability in there. It was about being a strong unit and fighting for the fans.

“The fans would have enjoyed it – I certainly did. We need to use it for a base for where we want to go in the league.

“Relief is three points and the table looks slightly better this week but I’m just so proud of the performance. That has made me really happy.”

Captain Seamus Coleman was the unlikely scorer of the opener, tapping in a rebound from Donny van de Beek’s cross, before Michael Keane’s thumping header made it 2-0 early on.

Anthony Gordon then added a third in the second half as Everton, who had 21 shots on goal, looked lively with the return of Alex Iwobi and Dominic Calvert-Lewin in attack.

Van de Beek was handed a first Everton start and was heavily involved, particularly in the first half, as Leeds struggled to gain momentum.

Leeds rarely tested goalkeeper Jordan Pickford but Rodrigo almost produced two moments of magic when long-range efforts crashed off the crossbar in the first half.

In the end, it was comfortable for Everton, who moved to within a point of 15th-placed Leeds after keeping a first clean sheet in 13 matches.

The pressure was on Everton to deliver after a dreadful run of form – and Lampard’s side showed intensity from the first minute.

Gordon almost made it 1-0 within seconds of kick-off, only to be denied by an excellent last-ditch block from Luke Ayling.

The hosts were well on top in the early stages too, with the Goodison crowd in fine voice as Leeds were put under pressure.

Coleman’s passionate celebration – a roar towards the home fans, a badge clutch and a kiss for Richarlison on the cheek – showed how much it meant for the captain to put his side in the lead.

Everton maintained their intensity after that and big tackles from Mason Holgate and Iwobi were appreciated by supporters, before Richarlison received a big cheer for his work in winning the corner which led to the second goal.

Leeds carried a threat in patches – Rodrigo’s stunning efforts hitting the crossbar twice, while Jack Harrison struck wide and Daniel James was almost played in behind on one or two occasions.

But Everton were good value for their victory – a first in the Premier League under new boss Lampard, and in 2022.

The Blues boss applauded the Goodison Park faithful as they chanted his name shortly after Gordon had helped steer Richarlison’s strike into the bottom corner for Everton’s third goal.

They were almost given a fourth goal to celebrate too but Salomon Rondon’s strike was expertly tipped over the bar by Leeds keeper Illan Meslier.

Everton’s 21 shots was their most in 78 Premier League games, since having 22 against Newcastle in December 2019.

Meanwhile, Leeds’ manager Marcelo Bielsa has another injury concern to contend with as Stuart Dallas was forced off within seven minutes.

With Manchester United, Liverpool and Tottenham coming up in their next three fixtures, Bielsa will hope the injury is not serious.