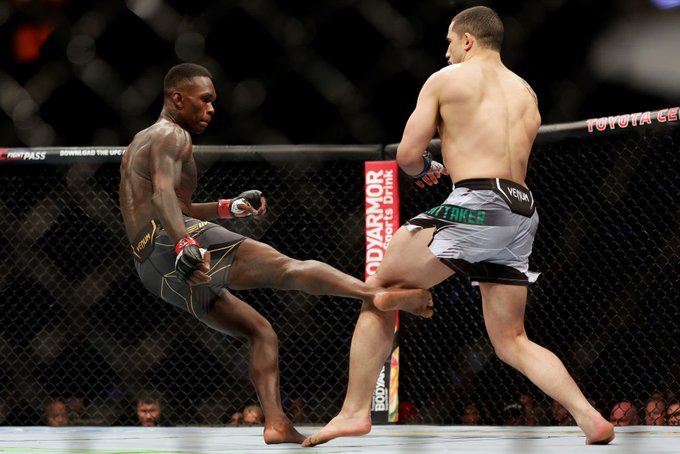 Over 16,000 fans packed into the Toyota Center to watch a middleweight title rematch almost three years in the making, which was preceded by hometown heavyweight Derrick Lewis’ hotly anticipated scrap with Tai Tuivasa.

Former WWE champion Booker T and social media star SteveWillDoIt were among the celebrities who opted to forgo Super Bowl celebrations in California to take in a massive night of fights.

And they were treated to an enthralling five-fight main card that included a striking masterclass from Bobby Green to beat Nasrat Haqparast.

Renato Moicano choked out Alexander Hernandez within two rounds of their meeting in the card’s opener after a fantastic back-and-forth bout.

Despite Israel Adesanya winning their first meeting by way of a vicious knockout back in 2019, Whittaker had earned his rematch by way of three wins.

It was a more muted walkout for Adesanya than his dance troupe effort for their first fight, but he was as animated as ever when the bell rang.

The key to victory for Whittaker was going to be the takedown, but Adesanya’s rangy kickboxing style and seven-inch reach advantage made him difficult to find on the inside.

Israel Adesanya attacked with the leg kicks early, landing 12 within a round, and had dropped Whittaker with just three minutes on the clock after landing a right hand through the guard.

The Australian replied with a sloppy takedown attempt, and admitted in his corner that the kicks had hurt him.

Whittaker came out more aggressive in the second, but that appeared to play into Adesanya’s hands as he continued his dominance.

Whittaker managed to land that all-important takedown halfway through the second, but Adesanya managed to get up quickly and continue his leg kick offence.

And in the third, Adesanya seemed to be struggling with an injury of some sort as he allowed Whittaker back into the fight.

By round four, Whittaker appeared to have found his groove, and almost locked in a submission on the champion’s back, and perhaps taking the round.

Heading into the fifth, Whittaker knew that a knockout was needed to get his belt back, but Adesanya was too impressive at range to allow that to happen.

A late shot by Whittaker after a low-blow allowed him time to recover saw the fight become more exciting for the Houston crowd.

But it was ultimately too little too late with Israel Adesanya taking the bulk of the rounds and retaining his title by unanimous decision.