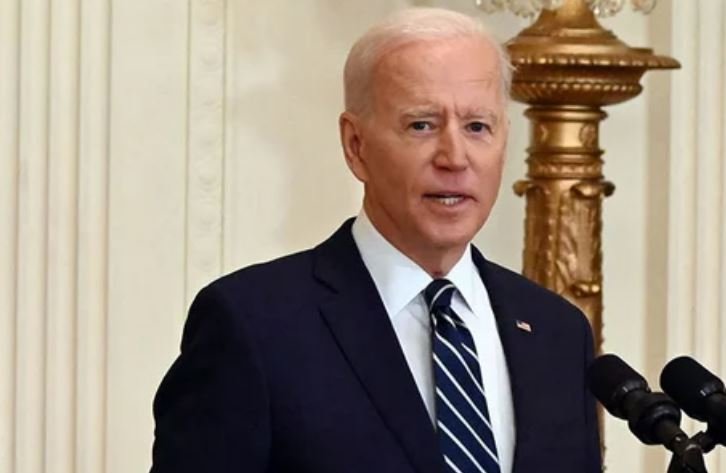 Mr Biden said he would not send troops to rescue Americans if Moscow invades Ukraine.

He warned that “things could go crazy quickly” in the region.

Russia has repeatedly denied any plans to invade Ukraine despite massing more than 100,000 troops near the border.

But it has just begun massive military drills with neighbouring Belarus, and Ukraine has accused Russia of blocking its access to the sea.

The Kremlin says it wants to enforce “red lines” to make sure that its former Soviet neighbour does not join NATO.

UK Prime Minister Boris Johnson said on Thursday that Europe faced its biggest security crisis in decades amid the tensions.

The US State Department urged Americans in the European country to leave immediately.

“We’re dealing with one of the largest armies in the world. It’s a very different situation and things could go crazy quickly.”

Asked whether there was a scenario that could prompt him to send troops to rescue fleeing Americans, Mr Biden replied: “There’s not. That’s a world war when Americans and Russia start shooting at one another. We’re in a very different world than we’ve ever been.”

Other nations, including the Netherlands, Japan and South Korea, have banned travel to Ukraine and urged their citizens in the country to leave as soon as possible.

US Secretary of State Antony Blinken, on a visit to Australia, said on Friday that “an invasion could begin at any time, and to be clear, that includes during the Olympics”. The Winter Olympics in China are scheduled to end on 20 February.

Russia and Ukraine announced late on Thursday that they had failed to reach any breakthrough after nine hours of talks with French and German officials aimed at ending the separatist conflict in eastern Ukraine. Ukrainian envoy Andriy Yermak said while there were disagreements “there is a will to continue and there is a will to negotiate”.

The current tensions come eight years after Russia annexed Ukraine’s southern Crimea peninsula. Since then, Ukraine’s military has been locked in a war with Russian-backed rebels in eastern areas near Russia’s borders.

Earlier, the UK prime minister said he hoped “strong deterrence” and “patient diplomacy” could find a way through the crisis but the stakes were “very high”.

In a joint news conference in Brussels with Nato secretary-general Jens Stoltenberg, Mr Johnson said he did not believe Russia had yet taken a decision on whether to invade Ukraine but the UK’s intelligence “remains grim”.