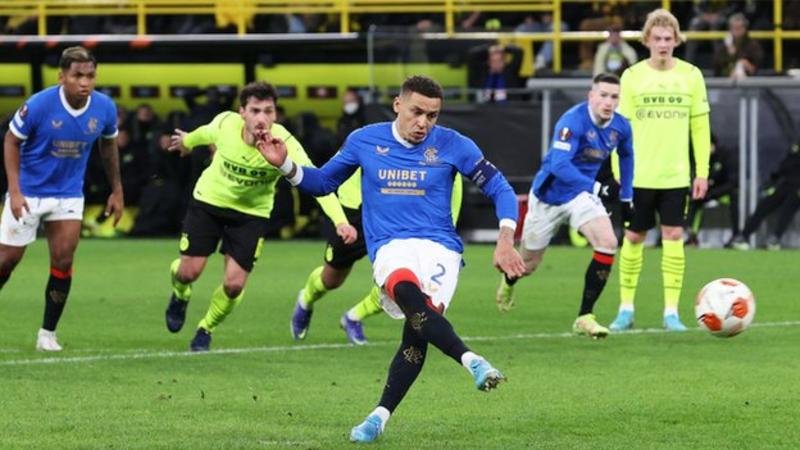 Rangers earned an incredible first-leg victory at Borussia Dortmund to put themselves firmly in the driving seat for a Europa League last-16 place.

The visitors stunned the German giants when James Tavernier’s penalty was followed by Alfredo Morelos’ tap-in.

John Lundstram’s fantastic strike made it three, but Jude Bellingham replied instantly with a fine drive of his own.

The game’s first five goals came in an astonishing 16-minute spell across the end of the first half and the start of the second period, as Rangers continually sliced through a fragile Dortmund side who currently sit second in the Bundesliga.

Despite there being only 10,000 fans in attendance because of Covid restrictions inside the iconic cauldron of the Signal Iduna Park, the home crowd made their feelings clear as the pocket of delirious travelling fans celebrated throughout the game and on after the final whistle.

The return leg of the play-off knockout round tie will take place at Ibrox next Thursday.

The absence of 21-year-old striker Erling Haaland, who has 23 club goals in 20 games this term, coupled with the subdued home crowd would have provided Giovanni van Bronckhorst’s men and their travelling following with crumbs of positivity for what was expected to be a daunting trip to Dortmund.

But even without their in-demand striker, the Bundesliga side’s starting line-up was still littered with top-level European talent.

But it was the Scottish visitors, who settled quickly at the Signal Iduna Park, asking the early questions.

Van Bronckhorst’s men were composed in possession and very nearly had a deserved lead when Ryan Kent slipped in Borna Barisic on the left of the box, but the Croatian’s low finish was saved by the foot of Dortmund keeper Gregor Kobel.

However, Rangers’ impressive opening was almost undone with slack defending when a home corner found Zagadou free, but the defender failed to make a clean enough connection with his downward header.

That missed opportunity seemed to briefly spark life into Dortmund, who saw a sweeping passing move end with Reus nicking the ball wide when leaving it for Malen was the better option.

But Rangers survived to bag two goals in a sensational three-minute spell which stunned the home crowd. Tavernier started it off as he sent Kobel the wrong way with a well-taken penalty after a VAR check spotted a clear handball in the box from Zagadou.

And it was two moments later when Joe Aribo flicked on Tavernier’s corner, leaving Morelos to tuck the ball away at the back post.

The manic nature of the game would continue into the second half as outstanding work from Kent on the left helped tee-up Lundstram, who wrapped his left foot around the ball to add a stunning third.

Dortmund raced up the other end in a breathless start to the half to reduce the deficit when Bellingham bent in a fine effort of his own, but Rangers’ remarkable lead was back to three in as many minutes.

Aribo slipped in Morelos on the left, who had a strike that was trailing wide. However, it took a nick off Zagadou and rolled into an empty net. The goal was momentarily ruled out, but a quick VAR review saw no issue with it.

Rangers continued to trouble a weak backline, with World Cup-winning centre-back Mats Hummels at the heart of it, as Aribo’s fierce strike whistled past the far post.

But on a night of fine strikes, it was Dortmund who had the last say when Guerreiro’s dipping effort left Allan McGregor, making his 100th European appearance, rooted to the spot.

Mbappe tempted by Liverpool move, as PSG offer him £1m a week