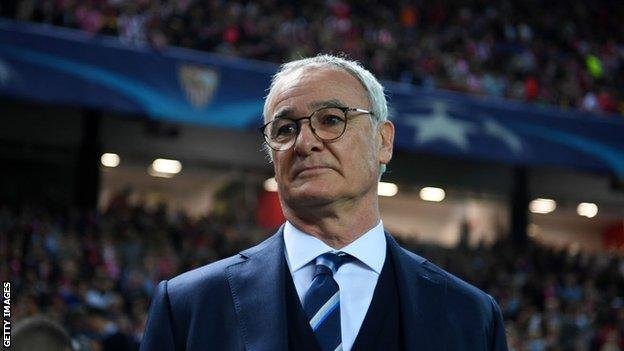 Watford have sacked boss Claudio Ranieri after 14 games and less than four months in charge.

The Italian, 70, was appointed on 4 October but managed only seven points from 13 Premier League games.

A club statement said a change was needed to give a new appointment time to lift Watford out of trouble.

“The Hornets’ board recognises Claudio as a man of great integrity and honour, who will always be respected here at Vicarage Road for his efforts in leading the team with dignity,” added the statement.

“However the board feels that, with nearly half of the Premier League campaign remaining, a change in the head coach position now will give a new appointment sufficient time to work with a talented squad to achieve the immediate goal of retaining Premier League status.”

It means Watford are looking for their 15th manager since the Pozzo family took over in 2012.

Ranieri, who famously won the Premier League title with Leicester in 2015-16, was given a two-year contract after replacing Xisco Munoz.

However, Watford managed just two wins under the former Sampdoria boss and he departs with the club 19th in the table, two points from safety.

They have lost seven of their previous eight Premier League games and next travel to relegation rivals Burnley on Saturday 5 February in a huge game at the bottom of the table.

The Hornets have lost 11 of their 14 games under Ranieri, 10 in the Premier League and a 4-1 loss to Leicester in the third round of the FA Cup.

‘I’m not worried about the future’

Ex-Chelsea manager Ranieri stunned English football by leading Leicester to an unthinkable title triumph in 2016, but he was sacked by the Foxes the following season.

A nomadic career has since seen him go on to manage Nantes, Fulham, Roma and Sampdoria, before he was appointed as Watford boss.

Ranieri was the 14th managerial change under the club’s owners in 10 years.

After what turned out to be his final match in charge of Watford against Norwich, he told BBC Radio 5 Live: “I’m not worried about the future.

“I’m calm and want to react – me and my players. I have the passion, I want players with the heart and to think about what is Watford for the people of Watford.”

Asked if he was confident of turning it around, Ranieri replied: “Yes I’m very confident.”