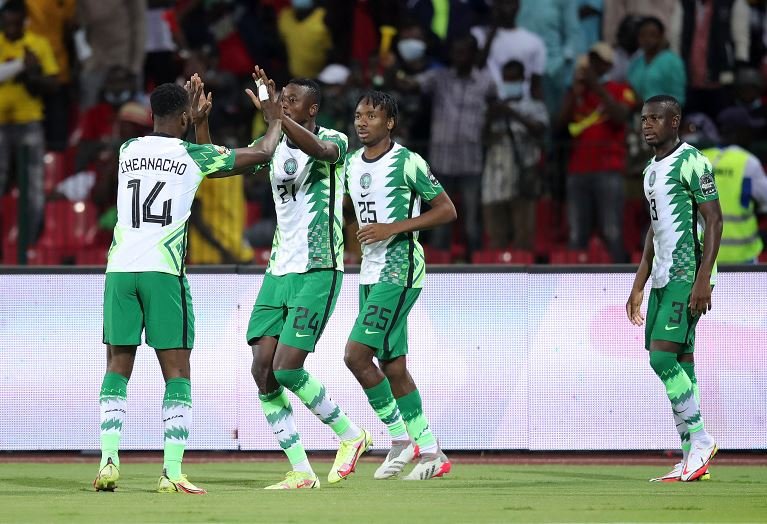 Sadiq Umar and William Troost-Ekong both scored as Nigeria beat Guinea-Bissau to win all three games in Group D at the African Cup of Nations in Cameroon.

Guinea-Bissau held the Super Eagles in the first half but in the second half, Leicester City forward, Kelechi Iheanacho found Sadiq Umar at the far post to put Nigeria ahead.

Before second half substitute Simon Peter darted past three Guinea-Bissau defenders, shot at the goalkeeper leaving Troost-Ekong with the simple task of tapping in.

In the other group match, Egypt beat Sudan 1-0 in Yaounde to finish second behind Nigeria with six points.

Three-time champions Nigeria had already topped Group D and knew their round of 16 clash on Sunday would be in Garoua, where they have played all their games so far.

They will have to wait until Thursday night to find out which of the best third-placed sides they face from either Group B, E or F.

Guinea-Bissau, meanwhile, have now gone over seven Nations Cup games without a goal, last scoring in their second match of the 2017 finals when they made their tournament bow.

Nigeria coach Augustine Eguavoen – who has made light of replacing Germany’s Gernot Rohr a month before the tournament – had the luxury of being able to rest players after his side’s fine start to the tournament, retaining only Iheanacho, Troost-Ekong and Wilfred Ndidi.

Defender Semi Ajayi was among those coming into the side and he almost opened the scoring when heading a free-kick over from close range, with Eguavoen holding his head in his hands at the wasted chance.

After Guinea-Bissau’s Maurice Gomis almost spilled an off-target Iheanacho shot into his own net, the Super Eagles finally took the lead when the Leicester City forward laid it on a plate for Almeria forward Sadiq to tap in at the far post.

Guinea-Bissau rallied shortly after when an on-target free-kick from Fali Cande was deflected behind by Troost-Ekong’s arm, with the Video Assistant Referee (VAR) overlooking the incident.

But the VAR referee was heavily involved just moments later when Troost-Ekong side-footed into an empty net after Simon’s blistering strike, after a jinking run past three players, crashed back off the underside of the bar to the Watford man.

Kenyan referee Peter Waweru pointed for offside only for VAR to overturn the goal as Troost-Ekong celebrated only his third goal for his country, two of which have come in the Nations Cup itself.

To their credit, Guinea-Bissau set out to attack but failed to get on the scoresheet once again as Jorginho shinned a decent chance wide just before the break, while Leonel Ucha Alves’ fine strike was smartly tipped round the post by sprawling Nigeria goalkeeper Francis Uzoho.

The West African side leave the competition with one draw and two defeats, just as they did at their two previous visits to the finals in both 2017 and 2019.

The Super Eagles, meanwhile, showed their strength in depth and that they will take some stopping but there will be far sterner tests ahead for a side buoyed by good support in Cameroon, which Nigeria borders.

We have not released zoning arrangement – APC

Buhari seeks passage of Proceeds of Crime, Whistle-Blower Bills, one other