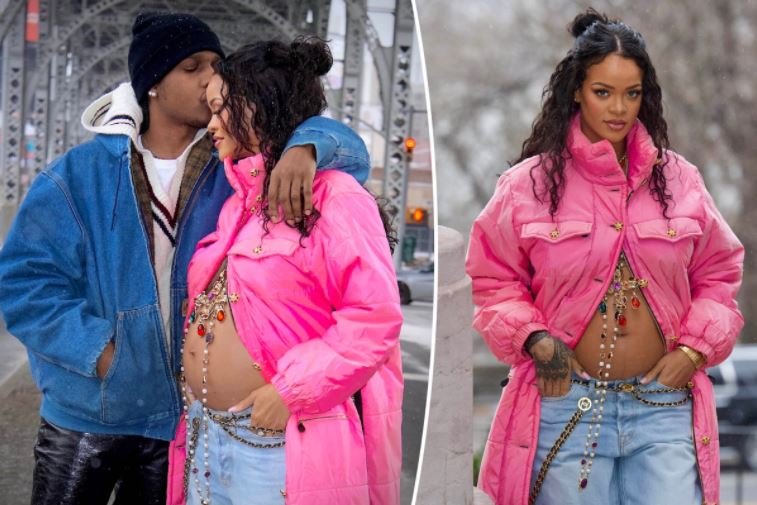 On Monday, the couple announced the happy news that Rihanna is pregnant with their first child, releasing a series of photos taken together in Harlem over the weekend.

In the images, Rihanna’s baby bump peeks out from a long, partially-unbuttoned pink jacket, while the pair hold hands and the rapper plants a loving kiss on Rihanna’s forehead.

In May, Rocky gushed about his new romance to GQ calling the singer the “love of my life.” When asked what it felt like to be in a relationship, he confessed, “So much better. So much better when you got ‘the One.’ She amounts to probably, like, a million of the other ones. I think when you know, you know. She’s the One.”

Rihanna and ASAP Rocky were friends before they began dating

And in terms of taking the next step in their relationship, he confirmed that starting a family is “in my destiny, absolutely.”

He added, “I think I’d be an incredible, remarkably overall amazing dad. I would have a very fly child. Very.”

Rihanna and Rocky first started dating in November 2020 after years of being close friends. Rumors of their coupling first began after Rihanna broke up with her boyfriend of three years, Hassan Jameel, in January 2020.

In July, she also featured Rocky in the campaign for her Fenty Skin product line.

In an interview with British Vogue last year, the “Diamonds” singer expressed her desire to be a mother one day. When asked where she saw herself in 10 years, Rihanna replied, “Ten years? I’ll be 42! I’ll be ancient. I’ll have kids—three or four of ’em.”

She added that even if there wasn’t a partner in the picture, “Hell, yeah, [I’d have kids on my own]. I feel like society makes me want to feel like, ‘Oh, you got it wrong…’ They diminish you as a mother if there’s not a dad in your kids’ lives.