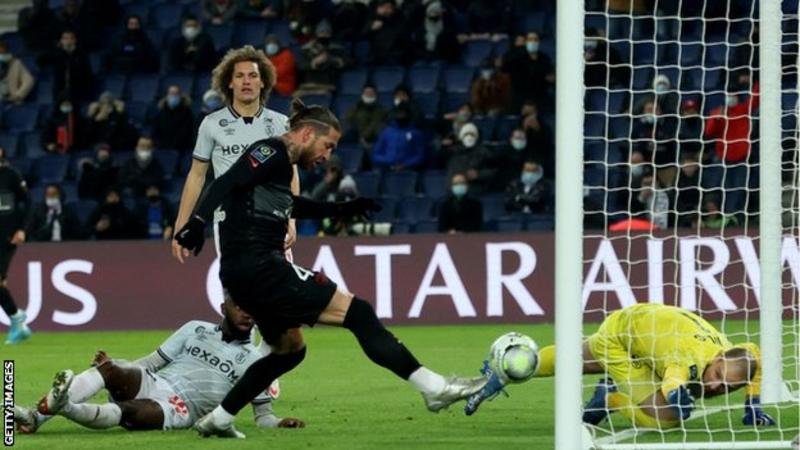 Sergio Ramos scored his first Paris St-Germain goal as they overcame Reims to continue their dominance of Ligue 1.

Mauricio Pochettino’s side had laboured a little until Marco Verratti fired in off the post moments before half-time – his first league goal since 2017.

Ramos forced a save then converted the rebound after the break and a Wout Faes own goal made the win certain.

Danilo side-footed a fourth via a deflection and PSG now sit 11 points clear at the top of the Ligue 1 table.

The win owed much to Verratti’s accurate opener as Reims had been competitive for more than 40 minutes.

Bradley Locko had forced a save from home keeper Keylor Navas and reported Newcastle target Hugo Ekitike was lively up front, firing over after cutting in from the left flank.

But Verratti’s finish meant PSG could play with poise and patience after the break and Ramos added a second, turning in from a yard after his initial effort was spilled.

Lionel Messi was brought on from the bench and teed up Verratti for what looked to be the Italian’s second, only for a deflection on its way to the net to be enough to see the goal credited to the unfortunate Faes.

Kylian Mbappe raced away from his marker down the left flank to deliver a fine assist for Danilo to claim his second goal of the season.

PSG are now 13 games unbeaten in Ligue 1 and the gulf in class – despite being pushed early on – underlines just how difficult it will be for the chasing pack to get anywhere near them.