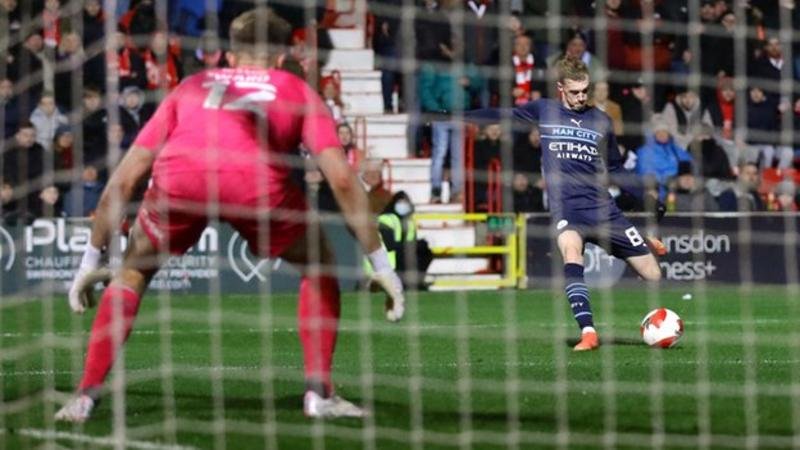 Teenager Cole Palmer scored one and made another as Covid-hit Manchester City brushed aside League Two Swindon Town 4-1 to reach the FA Cup fourth round.

City manager Pep Guardiola was absent from the dugout at a packed County Ground, as he and 20 of his players and staff were isolating after testing positive for the virus.

Despite seven first-team players being among those who could not travel, the Premier League leaders named a strong team and were merciless against a side 72 places below them in the English football pyramid.

Bernardo Silva met a low cross from 19-year-old Palmer to put last year’s beaten semi-finalists ahead early on, with Gabriel Jesus making it two after the Robins gifted the visitors possession on the edge of the area.

Ilkay Gundogan beat Lewis Ward with a free-kick from 25 yards to make it 3-0, but the Swindon goalkeeper did well to save a Jesus penalty minutes later after Silva was fouled by Jordan Lyden inside the box.

Harry McKirdy pulled a goal back for the hosts late on, only for Palmer to complete the scoring for City with a brilliant finish from a tight angle.

While Guardiola had to follow the game from afar, his assistant – and stand-in boss against Swindon – Rodolfo Borrell revealed before the game that the 50-year-old would remain “connected” with those that made the trip to Wiltshire.

Borrell made just four changes to the side that beat Arsenal 2-1 on Saturday, despite the club being hit by an outbreak since that game.

Raheem Sterling, Phil Foden and Jack Grealish were among those not travelling, but defender Kyle Walker was recalled and midfielder Gundogan was handed the captain’s armband on his return to the starting XI.

Midfielder Palmer was handed a first FA Cup start and made an immediate impression with fine work on the edge of the box to create space to tee up Silva for a close-range finish for the opener.

Silva could have had a hat-trick before the break, but wasted chances either side of that goal.

Swindon gifted City their second as they tried to play it out from the back. Jesus collected possession and traded passes with Kevin de Bruyne before coolly beating Ward.

Gundogan’s free-kick just before the hour put the result beyond doubt, but Ward’s penalty save and McKirdy’s fine low finish to beat Zack Steffen at his near post ensured Swindon fans had plenty to celebrate even though Palmer emphasised City’s dominance with the pick of the goals late on.