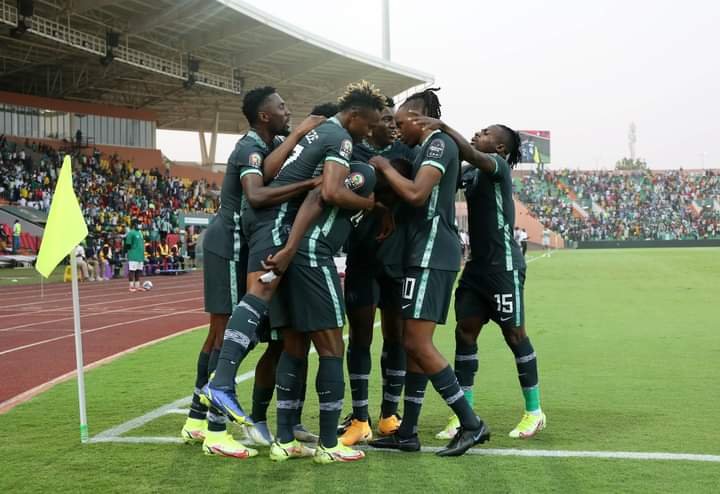 The Leicester City striker opened the scoring in the 30th minute, burying a stunning half-volley on the turn.

Nigeria dominated throughout, with Egypt keeper Mohamed El Shenawy tipping a Taiwo Awoniyi header on to the bar and twice denying Chidera Ejuke.

The Pharaohs offered little in response after falling behind in Garoua.

Iheanacho’s performance up front will be a welcome relief to Super Eagles supporters, with fellow Nigeria strikers Victor Osimhen, Emmanuel Dennis and Odion Ighalo all forced out of the squad for Cameroon.

The Foxes man impressed throughout the first half, feeding in Awoniyi who saw a tame effort saved shortly before the break.

Nigeria, three-time African champions, continued to push for a second after half-time with El Shenawy twice keeping out substitute Chidera Ejuke in the closing stages.

The Super Eagles were well-supported at the Roumde Adjia Stadium, less than 400 miles from Nigeria

Ultimately though one goal was enough for the West Africans, lead by interim manager Augustin Eguavoen with new boss Jose Peseiro only observing from the stands.

Egypt were lacklustre for much of the proceedings, managing just one shot in the opening 70 minutes.

Liverpool star Mohamed Salah, who has reaffirmed his desire to stay at Anfield, repeatedly found himself isolated up front as Nigeria dictated the match’s tempo.

The forward was played through by substitute Ahmed Sayed with 20 minutes remaining but his mishit shot was saved by the legs of Nigeria keeper Maduka Okoye.