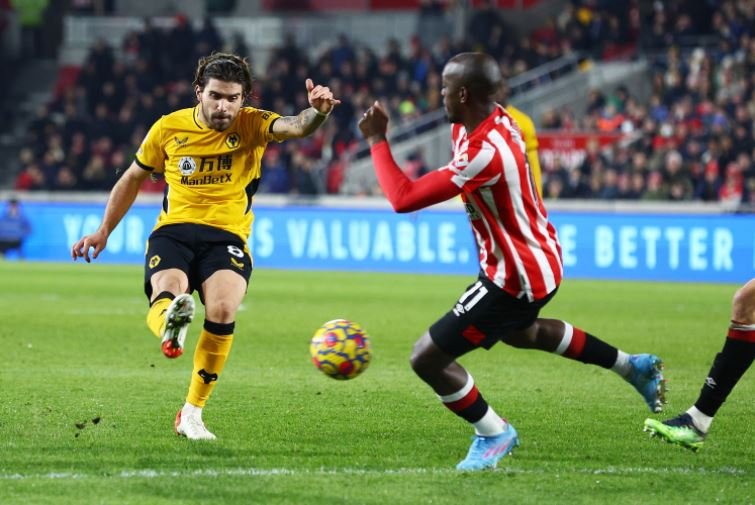 Ruben Neves’ second-half strike earned Wolves all three points at Brentford, in a game that was halted for over 25 minutes in the first half due to a clash of heads and a drone hovering above the ground.

Referee Peter Bankes took both teams off the pitch just after the half-hour mark when the device was spotted above the Brentford Community Stadium.

That came after a six-minute break in play due to a nasty collision involving Brentford team-mates Mathias Jensen and Rico Henry.

Wolves were quickest to settle after the stoppages and took a deserved lead three minutes into the second half when Joao Moutinho played a neat one-two with Nelson Semedo before finding the far corner with the outside of his right foot.

Ivan Toney steered home Bryan Mbeumo’s free-kick to equalise against the run of play, moments after Bankes had overturned his own decision to send off Wolves defender Toti Gomes for a challenge on Kristoffer Ajer.

But Neves restored the visitors’ lead with a well-placed finish into the bottom corner from the edge of the box, before Adama Traore had a goal ruled out for offside in second-half stoppage time.

Brentford manager Thomas Frank was shown a second yellow card for remonstrating with referee Bankes after the final whistle.

The win extends Wolves’ unbeaten run in all competitions to six games, while Brentford have now lost their last four Premier League fixtures – although they remain eight points above the bottom three.

Brentford were starting to stamp their authority on the game when the collision between Janssen and Henry left both players covered in blood and requiring lengthy treatment on the pitch. The pair were eventually taken off as concussion substitutions.

An even longer stoppage followed when the drone was spotted near the roof of the stadium, resulting in the players being taken off. They returned more than 15 minutes later for a brief warm-up before play eventually resumed.

When the game restarted, Bruno Lage’s team pinned the Bees inside their own half without testing goalkeeper Jonas Lossl. But that changed soon after half-time when Moutinho combined brilliantly with Semedo before curling home his second goal in three league appearances.

Frank’s team were poor after the lengthy stoppage, lacking composure on the ball and struggling to test Jose Sa in the visitors’ goal. Toney’s clinical finish from Mbeumo’s delivery – the striker’s seventh goal in all competitions this season – was the hosts’ first effort on target and looked like it might earn them an unlikely point, until Neves’ late strike.

The Bees were firmly second best and have their work cut out to arrest a worrying run, with Frank cutting a frustrated figure at full-time.

As for Wolves, they have now won four of their last five league matches.