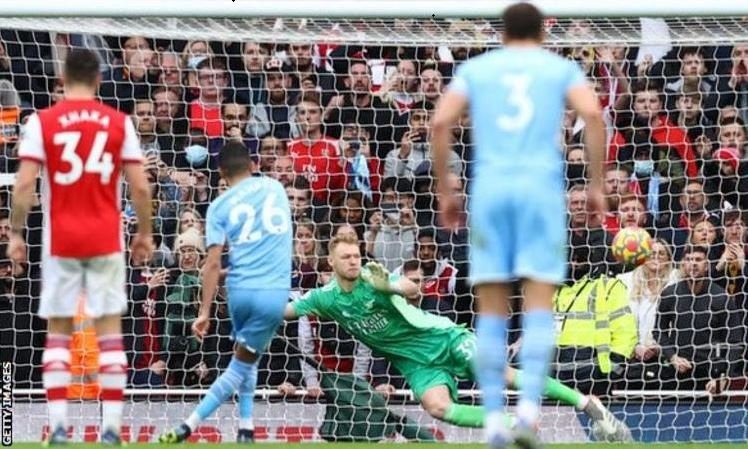 Rodri scored a stoppage-time winner as Manchester City beat 10-man Arsenal to move 11 points clear at the top of the Premier League with an 11th successive victory.

That advantage will be cut to some extent on Sunday when second-placed Chelsea host third-placed Liverpool, although no team has failed to win the Premier League title when beginning the new year with a lead as big as City’s.

Arsenal looked to have held out for a draw but Rodri steered in a loose ball in the 93rd-minute to help City maintain their dominant form.

The hosts were the better side early on and Bukayo Saka swept in a deserved opener to finish off a slick move at Emirates Stadium, before the Gunners self-destructed after the break.

Riyad Mahrez levelled from the penalty spot after Bernardo Silva was brought down by Granit Xhaka, with referee Stuart Attwell overturning his initial decision after viewing the pitch-side monitor.

One minute later Arsenal defender Gabriel Magalhaes was sent off for two yellow cards in quick succession, the first for trying to scuff up the spot and the second for a foul on Gabriel Jesus.

Arsenal, whose manager Mikel Arteta was forced to watch from home following a positive Covid test, remain fourth in the table.

City are the blueprint for Arsenal in terms of their playing style and philosophy and, while a young Gunners side remain some way behind in their evolution under former City assistant manager Arteta, they showed how far they have come this season.

Pep Guardiola found his City team up against a completely different outfit to the one they dismantled 5-0 in August to briefly send Arsenal to the bottom of the table.

Guardiola said beforehand this would be the best Arsenal team he has faced during his time in England, despite Arteta – the Gunners’ “most important player”, according to Guardiola – having to watch this one unfold from home.

With assistant Albert Stuivenberg on the touchline, the energetic hosts swarmed and pressed in an electric opening half an hour.

They capitalised on their dominant start with a goal out of the leaders’ playbook, Ben White winning back possession and starting a swift counter-attack which ended when Kieran Tierney slid a ball weighted perfectly for Saka to send a first-time finish into the bottom corner.

It was only the second first-half goal Manchester City have conceded in the league this season.

An earlier slick move had put Martin Odegaard in behind the City defence only for goalkeeper Ederson to get a toe to the ball, with the video assistant referee taking a long look before agreeing with the on-field decision that it was not a penalty.

Perhaps that added to Arsenal’s frustration when they had a penalty awarded against them after VAR intervened, but a momentary loss of composure cost them.

Gabriel’s two yellow cards came either side of Gabriel Martinelli striking the bar in what was a frantic few minutes after Mahrez levelled from the spot.

Arsenal were forced to dig in and defend after that and looked to have done enough until a hopeful cross from the right dropped to midfielder Rodri, who poked the ball beyond Aaron Ramsdale.

Despite their improvement, it means Arteta has lost all five of his Premier League meetings against former mentor Guardiola.

Guardiola’s domestic juggernauts racked up records for goals and points in 2021 and will finish New Year’s Day in 2022 with a lead that has only been bettered twice in the Premier League era.

Manchester United in 1993-94 and City themselves in 2017-18 – both of whom held 12-point leads – went on to win the competition and Rodri’s late goal must have left City’s title rivals feeling deflated this time round.

They did have early chances. Gabriel Jesus steered a header wide and Ruben Dias flicked another beyond the post, but the game turned in their favour after the break.

City have not lost in the league since October and have had to show resilience in their past two games to maintain their impressive winning run.

But, for all the goals and free-flowing football, it may just be the 1-0 win at Brentford on Wednesday and this victory – their latest winning goal in the league in more than three years – that give them City edge come the end of the season.

Tottenham close in on top four with late win at Watford