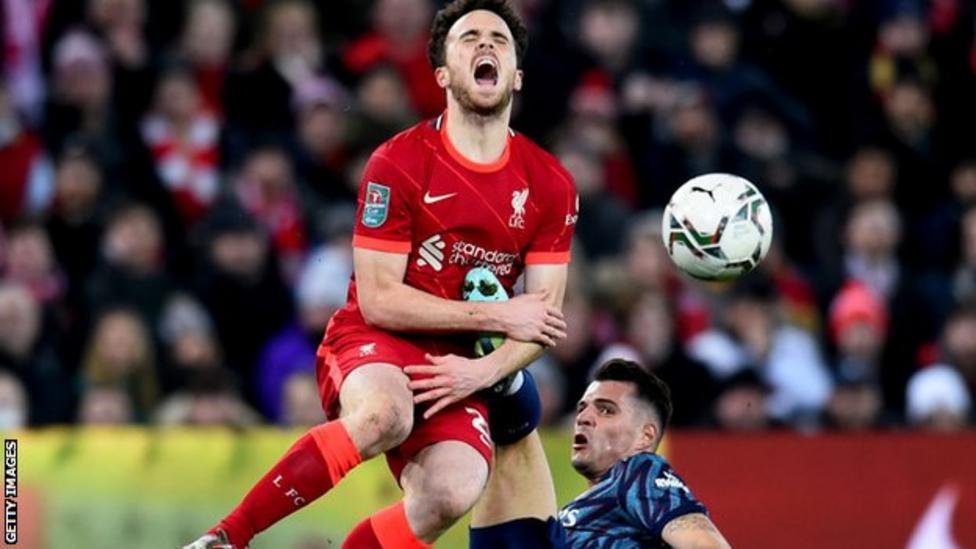 Liverpool were left frustrated by 10-man Arsenal in the first leg of their Carabao Cup semi-final at Anfield.

Granit Xhaka was dismissed after 24 minutes for denying a goalscoring opportunity – the Swiss midfielder catching Diogo Jota with a high challenge on the edge of his penalty area as he attempted to cut out Andrew Robertson’s pass.

Trent Alexander-Arnold could not punish Arsenal further from the resulting free-kick, however, and the visitors produced a resolute defensive display to leave on level terms.

Despite coming under intense pressure it was Arsenal who registered the first shot on target 71 minutes into the contest, but a poor first touch by Bukayo Saka allowed Alisson to smother the England international’s shot at close range.

Takumi Minamino blazed over the crossbar when faced with an open goal with Liverpool’s best chance of the match in the closing stages.

The second leg takes place at Emirates Stadium next Thursday at 19:45 GMT.

The winner will face Chelsea in the final at Wembley at the end of February, after Thomas Tuchel’s side completed a 3-0 aggregate victory over Tottenham on Wednesday.

Eight-time EFL Cup winners Liverpool had lost home advantage for the second leg after a Covid outbreak in their squad saw the planned first meeting in north London postponed until 20 January.

A number of those cases turned out to be false positives – though the EFL has said it will not be investigating further – but despite being able to field a strong side the Reds were unable to make the most of their home leg against 10-man opposition.

Both sides have lost key players to the ongoing Africa Cup of Nations but it was the absence of top scorer Mohamed Salah and fellow forward Sadio Mane which proved most noticeable as Liverpool struggled to break Arsenal down.

Minamino flashed a ball across the six-yard box as the hosts pressed for a breakthrough with greater urgency in the second half, but Jurgen Klopp’s forward trio that also included Jota and Roberto Firmino could not produce the necessary quality in the final third.

On a challenging night for the visitors, Martin Odegaard missed out following a positive Covid test and Xhaka’s dismissal – in addition to Thomas Partey’s Afcon participation – has compounded Mikel Arteta’s midfield issue ahead of Sunday’s north London derby.

But the Arsenal goalkeeper’s only moments of real concern arrived in the final moments, as Minamino struck over after Ramsdale failed to claim the ball – while the excellent Ben White was back to clear Neco Williams’ attempt in stoppage time.
Liverpool will feel deeply frustrated that they could not make their numerical advantage count, yet Arteta’s side deserve huge credit for a disciplined performance that ensures they have every chance of reaching the final.

Both clubs return to Premier League action on Sunday, as Liverpool host Brentford (14:00 GMT) and Arsenal are at Tottenham (16:30).