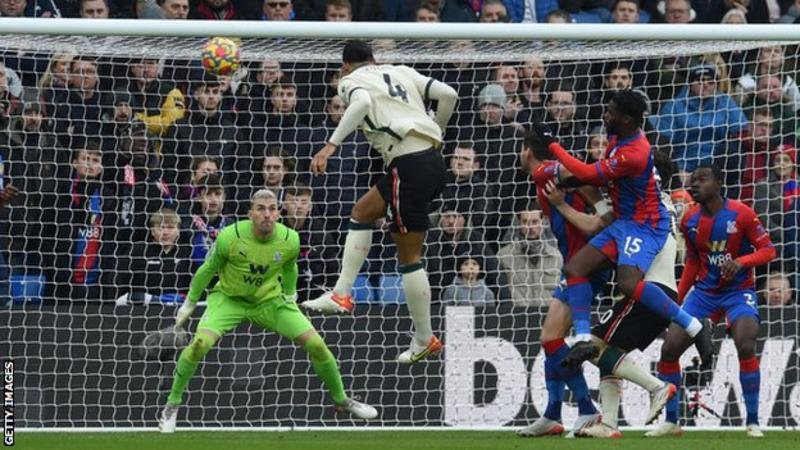 Liverpool boosted their hopes of catching Manchester City in the Premier League as they mixed early class with late resilience to hold off Crystal Palace at Selhurst Park.

Less than 24 hours after league leaders City dropped points for the first time since October, Jurgen Klopp’s side were sharp and ruthless early on to take the game away from their hosts.

The intensity of their press and crisp use of the ball overwhelmed Palace and Virgil van Dijk rose to deliver a bullet header for their opener before Alex Oxlade-Chamberlain finished a sweeping team move for their second.

Palace, though, eventually offered moments of warning, with Liverpool keeper Alisson forced to save well from Michael Olise and Jean-Philippe Mateta before Conor Gallagher glanced a header wide with the opening attack of the second half.

They finally broke through when the ever-willing Mateta raced onto Jeffrey Schlupp’s superb through ball and unselfishly squared for Odsonne Edouard to tap into an empty net.

It prompted nervy moments for Klopp’s side as Joachim Andersen drilled an effort wide and Olise went close with a late lob.

But Fabinho whipped home a penalty after Diogo Jota was felled in the box and a spot-kick was awarded after VAR suggested referee Kevin Friend should revise his initial decision not to penalise Palace.

It secured victory for Klopp’s side, who have managed to take maximum league points from the fixtures missed by key forwards Mohamed Salah and Sadio Mane while they play in the Africa Cup of Nations.

Liverpool dig in as Palace rally

Oxlade-Chamberlain chested down before drilling in Liverpool’s second

Much was made of how Klopp’s side would handle the loss of Mane, Salah and Naby Keita, who will be available again for the visit of Leicester on 10 February. In their absence the Reds have marginally improved their hopes of challenging for the title.

The gap at the top has been reduced to nine points and with Liverpool having a game in hand, fans of a red persuasion will hope this tight victory coupled with the end of City’s 12-game winning run leads to a momentum shift for the sides..

Klopp’s side, who secured a place in the EFL Cup final at Wembley by beating Arsenal on Thursday, brimmed with early confidence.

They swarmed Palace to win the ball back seven times in the final third in the opening 30 minutes and had played double the number of passes compared to their hosts in the same period.

Andrew Robertson delivered the crosses for Van Dijk and Oxlade-Chamberlain to take his assist tally to 43 since the start of the 2017-18 season – the same mark as Trent Alexander-Arnold, and only Manchester City midfielder Kevin de Bruyne has more in the league on 52.

But for all their early brilliance Liverpool found themselves on the end of a marked momentum shift towards half time.

Their 11 first-half shots fell to as few as four after the break as Palace began to find a footing and Alisson’s saves kept the home side out until Edouard deservedly rewarded their industry.

Olise, signed from Reading in the summer, looks set to prove a key force for Patrick Vieira.

The 20-year-old and the on-loan Gallagher covered more ground than any other Palace players but Olise created two chances and looked lively in advanced areas throughout, notably when he almost levelled with a deft lob late on.

Vieira and Palace will feel aggrieved at key moments in the defeat. There was a suggestion Roberto Firmino was offside in the build-up to Oxlade-Chamberlain’s goal and the foul on Jota for the penalty that sealed the win was dubious.

The Portugal forward seemed to slightly change the direction of his run to collide with Palace keeper run Vicente Guaita, but referee Friend believed it was a penalty when he consulted the touchline monitor.

Vieira’s side have just one win from their last six outings and enter the winter break on 24 points from 22 games – five fewer than they had under Roy Hodgson after as many fixtures last season.

They will hope to add results to promising performances like this one, while Liverpool know they must keep churning out wins like this if they are to stand any chance of reeling in league leaders City.